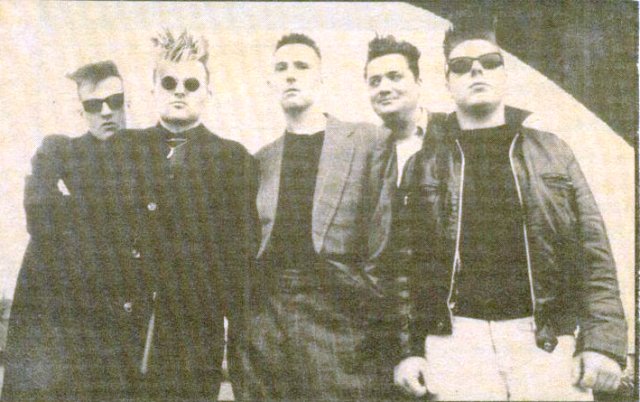 THE VIBES were formed in Essex, UK in the fall of 1983. The original lineup featured Gaz Voola (v) aka Gary Boniface, Lloyd Tripp (b), Martin Parson (g), Bob Madden (g) and a fourteen year old drummer, who was replaced by John Jobbagy in early 1984. Mike Spencer, frontman of The Cannibals, helped them get a foot in the 'Garage' door and The Vibes soon supported the likes of the Tall Boys and The Sting-rays. Unable to get the record deal, they're looking for- for whatever reasons- the band was almost to split up.  Lloyd Tripp already  had appearances with the Blubbery Hellbellies and the Sting-Rays when the band finally came to the attention of Big Beat Records´  Roger Armstrong, who signed them to record their debut EP Can You Feel The Vibes?  immediately. The quintet was also taped recording a thrilling interpretation of Alligator Wine, which was included on the Revenge Of The Killer Pussies compilation album. Lead guitarist Martin Parson departed from the band and was replaced by former Cannibal guitar man  Johnny "Mother" Johnson and the reformed VIBES signed a new record deal with Chainsaw Records. The band released one more 7" vinyl, a 12" EP and their only full-length album What's Inside ? which hit the Top 10 of the  UK Independent Charts. They also toured all over Europe and were even having an appearance on French TV in 1985.  THE VIBES released another 7´´ vinyl, entitled  Something Ain´t Right on Chainsaw  in 1986, but differences of opinion between the band members and the management had already forced a final split. Gaz, John and Johnny  re-emerged as The Purple Things soon after the split, which released two more excellent EPs for the Media Burn label. Bassist Lloyd Tripp continued his musical career with Sunny Domestozs and The Bugs, before he finally emigrated to the USA in 1987 and has been busy ever since with his  Rockin' Lloyd Tripp & The Zipguns.

Unlike many other bands, that emerged from the mid-eighties Trash boom, THE VIBES has always enjoyed  a great deal of attention by legions of open-minded Psychobillies  due to to their wild , raw, no-nonsense set of Rock'n'Roll mayhem, that was always backed by an awesome, healthy sound of the bull fiddle, pushing vocals and a very tight sound.