Hey Vadim, first of all tell us the story of the evolution from the original Mad Heads to Mad Heads XL. I know you´ve added a brass section, but what were the main reasons for the expanded lineup and the new sort of sound?

Well, I think the main reason was that we were always very open-minded to experiment with our music. The brass section in particular was interesting for us, because a lot of music that we loved used the brass. We loved all that neo swing stuff that happened during 90s, and we loved ska and ska punk, and lately we enjoyed Manu Chao and Balkan folk stuff, like Goran Bregovic, Emir Kusturica and No Smorking Orchestra etc…

So the step to brass section was natural and long awaited from one side, but kind of scary to take for the band that used to be a trio and play one style of music (more or less) for such a long time. We used brass instruments in a few songs on the last 2 Mad Heads albums… Then we had a few new tunes that were not possible to play without brass… And then we decided to give it a try, do a concert program in expanded line up. It went down so well from the first rehearsals, first club gigs, then in a wink we found ourselves on stages of the biggest Ukrainian open airs… So we decided this must be a band on it’s own. Then we had a big national hit with one song and a few smaller with the others. So it happened, that we didn’t have any time for the trio format. To tell the truth, not much enthusiasm as well.

Are there any plans to reanimate the Mad Heads as a Psychobilly trio some day or are these days definitively over?

Trio days are such a big part of my past, that I won’t be so stupid to say “never”. I actually do expect some kind of nostalgia for me in the future. We might want to revive for a tour and maybe even for an album, but it will also depend on the scene. If the people want us back as a trio, someday we might come this way.

Do you remember how and when you get personally in touch with Rockabilly/Psychobilly for the first time? I guess there wasn't a big scene in the Ukraine back in 1991? When and why did you decide to create a band playing Psychobilly or Neorockabilly music?

There were no psychobilly/rockabilly scene in Ukraine back then and I started the band to spread this music in my country. It was a mission. Now, with the new generation of the bands trying on their quiffs and double basses, this mission is over and I can dedicate myself to something that now seems to be more important to me.

I do remember my first touch to rockabilly and it was Elvis, and soon after - Stray Cats. The first touch to psychobilly happened in the same time, and it was Batmobile, Guana Batz and Klingonz LPs plus a compilation Psycho Attack over Europe. That all was love at first listening. While all the local rockers wanted to be Nirvana, I wanted to play music from outer space, which I was doing in quite a short time.

To me, you´re one of the more gifted songwriters of the genre , too. Where do your inspirations come from? Do you have any specific rituals or something just like that while writing a song?

Thanks for high ranking. Well, “the rituals” might be changing over the years, but the real feeling for writing a good song was always the same. It’s “channeling”, the tunes are coming to me from somewhere out of this world. The lyrics were more of a mind job back then, now I’m learning to get them from the same source that the music comes.

Speaking of songwriting. The lyrics of the first three albums "Psycholula", "Mad(e) In Ukraine" and "Naked Flame"-were written in English-with the exception of some bonus tracks on Naked Flame-.The tracks of the last Mad Heads album "Contact" and your first issue with the Mad Heads XL outfit "Nadiya Yea" were mainly written in Ukrainian. Why do you prefer Ukrainian lyrics for Mad Heads /Mad Heads XL at the moment?

In the early days it was important to keep close to the roots of the genre, and that meant lyrics in English. For the forth album we wanted to experiment with that, and also the idea was to reach more audience in Ukraine. I wasn’t very surprised to discover that Ukrainian lyrics don’t work very well with psychobilly (I actually expected this), but I didn’t know something else might happen. I found out that I liked how Ukrainian language sounds, that I liked to sing in it, but the music had to be somewhat changed. This was one of the reasons for taking the brass section, we thought: “if we don’t play psychobilly any more, why don’t we go much further and expand the line up”.

It is not very typical for Ukrainians to go out to the streets for any kind of protest, but that time it was huge and important for the whole nation, the moment of growing up. It was not the name of the president that was the main reason for the Orange Revolution. It was the time to state that in this country the votes on elections must be counted and not faked any more. It was a huge step from declared democracy to the real one. Maybe the first real step in that direction… So we all feel necessary to be there, to support the spirit of the people, which was very high. It will be one of the strongest impressions and most remembered performances for the rest of my life. The revolution was so peaceful and kind-hearted, it was more like giant festival where all the people were happy, treated each other like brothers, behaved with high morals and believed in great ideals. It was something like great hippy festival but without drug stimulation. Amazing, real feeling… I did realize it won’t be so good and easy when all that was going to finish, but the moment was so much worth living it.

The Mad Heads XL are among the most popular live acts in the Ukraine. I´ve read you ´ve also played on the "Day Of Youth" in front of an audience of 100,000 people. What's the difference between pleasing a crowd of 100,000 kids and satisfying a fistful of wrecking Psychobillies?

Both are great, but definitely different. The bigger the crowd, the simpler you must be to get in contact, but when you do, the energy exchange is so huge. It’s also such a great feeling when that giant mass of people is singing along your song, even when you stop singing. Playing for a bunch of psychobillies is kind of being a member of a secret society, which is cool in it’s own way. But I’m not the big fan of the secret societies, I always wanted psychobilly to be bigger.

I´ve just watched again some of your promo videos, that are really impressive like Ghost or the cartoon-styled Ne Po Puti. Can you tell us the story of generating a Mad Heads video?

It’s very different each time. Like, “Ne Po Puti” is done by band’s long time fans & friends, twin sisters Olya and Vera “Madtwins”. They made artwork and design for “Naked Flame” and “Kontakt” albums, T-shirts etc. But they always wanted to do more for the band. So one day I said – can you make a music cartoon, so we can use it on TV? And that’s just what they did! They didn’t have any experience before, but they made a great animated video from the first try. It really had a good airplay on TV.

Here´s my last question. The Mad Heads XL have participated in a song called "Ukrayino, Vpered!" ("Ukraine, go ahead!") to support the Ukraine football team at the FIFA World Cup in Germany this year. Tell us about it!

Well, it was the first time that Ukraine got to the World Cup, so even those of us who were not much of football fans became victims of a great football fever. And when the proposition came from the sponsor of national team to take part in the song, we were definitely in it. The song went down quite well, the people are singing it during matches now. However I’m not happy with the original version as it’s too much pop & dance for me, definitely not my band’s sound. So we did our own live version which rocks. When we play it at big stages, we bring the balls with us and kick them off to the audience. 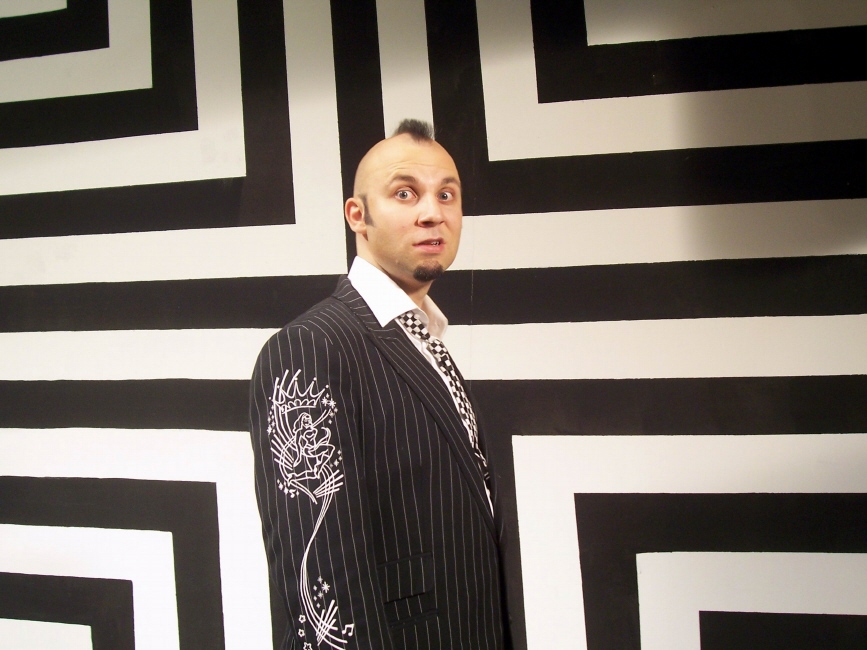