This CD album is the great collection of WIGSVILLE SPLIFFS tracks and captures the Klub Foot regulars’ output from the 1980s. The sixteen-track Raucous release includes all of the trio’s contributions to previously released  Psychobilly/Neorockabilly compilations, excluding the Stomping At The Klub Foot material and Home Run, which was featured on Zorch Factor 2. It also offers a bunch of demo takes, including a studio version of fan favourite Al Capone, an alternative recording of Buzz Outta You, and some previously unreleased live takes. The sold-out first pressing was re-released recently after resurgent interest in the band following its reunion in 2008. Other highlights are I Ain’t Lonely No More, I Got A Feeling, It Ain’t Easy and Guess I’m Drunk Again.

Here it is, the first ever studio album from Klub Foot regulars, the WIGSVILLE SPLIFFS, if we turn our back on the Raucous Records collection of demo tracks and compilation album songs that saw the light of day in 2002. The Drunkabilly Records offering contains twelve tracks of hard-nosed Neorockabilly with a solid variation on the theme that shall please both boppers and wreckers. The output is good-tempered Rock'n'Roll, backed by excellent, clear guitar sounds, fat slaps from the bull fiddle and catchy tunes.... 'Still rockin', still wreckin, forever young!' My favourite tracks are Red Mist, Fat 41, Forever Young and their re-recordings of the Klub Foot anthems High Class Power and Ain't Lonely No More, that was the title track for a Fury compilation and my personal battle cry some moons ago. 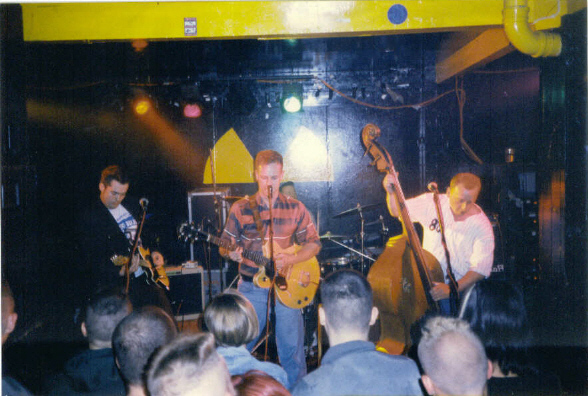