( SINGER WITH THE SURFIN´ WOMBATZ )

How and when did the Surfin´ Wombatz form?

The idea for band came in 1986 after we had been to a King Kurt gig. Tony, our original drummer, was a big King Kurt fan. So together with Sean and Paul Gallagher on guitar and slap bass we started rehearsing. Our friend Dr. Johnny Satan joined on washboard and our first gig was on 27th August 1987. We actually made some cash at that gig!

Why and when did you split up ?

Our last gig was in October 1991 and by the end of the year it was over as the scene in the U.K. was very poor.

What do you each do after the band split ?

Well, we´ve always remained friends- we had the same line up from beginning to end and on all of our recordings- We would always bump into each other at weddings etc. Drummer Tony got married and moved to the west country and now works as a lighting technician. The rest of us got married, had kids and concentrated on making a living.

What other Psychobilly bands did you enjoy playing with ?

We enjoyed playing with everyone, really. Especially Thee Waltons, The Highliners and Klingonz, plus playing at the Klub Foot was f***ing brilliant!

What were your official releases?

"Lager Loutz " album on Nervous Records and "Peter Cushing" 7´´ EP on Pulp Records and about half a dozen compilation appearances. Line up on all these was Steve "Uggy" Young- vox, Sean Gallagher- guitar, Paul Gallagher- slap bass, Tone Def  Tony- drums and Dr. Johnny Satan on washboard and backing vox.

What or who influenced your sound?

Why get back together?

Well in 2006 Paul had some spare tickets for the Stray Cats. After seeing that gig , we had the buzz about playing together again.

What's today's line up? What's the future for the Surfin´ Wombatz?

Line up today is me (Uggy ), Sean, Paul, Dr. Satan and new drummer Juan. We are writing and rehearsing new stuff still in the old school style. we are planning a new CD / EP and gigs around London as soon as we can. We would love to gig with the Hot Rockin´ Trio, the best band I´ve seen for ages. Watch this space...... 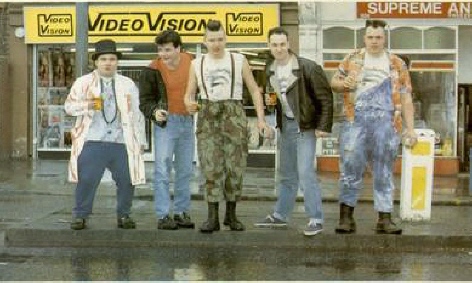