(FIDDLE PLAYER WITH SUNGLASSE AFTER DARK AND DEMENTED ARE GO)

How old were you when you first got interested in music and what bands were you first into?

I was twelve and I can pretty much name the exact day...1st December 1976 when I saw the Sex Pistols on the Bill Grundy TV show. I thought it was the coolest thing I's ever seen, totally blew me away. I became pretty much instantly obsessed with punk rock.

Is the electric fiddle your only instrument? When did you pick it up?

Yeah, it's the only thing that I play. I started learning at school when I was 9. I wanted to play the trumpet but they didn't have any trumpets, just lots of violins (it was such a nerdy instrument that no-one else wanted to learn it so there were quite a few available!)

What was your first band?

How did Sunglasses After Dark get going?

We started back in 1980 when I was fifteen. Our first "gig" was busking outside our local wine bar . We had only worked out one song - some Iggy and the Stooges cover version as I remember - and we just played that one over and over. In the end the manager came out and gave us a bottle of wine between us on the condition that we stopped playing.

How many releases did they have and why and when did it finish?

We only really had two release - which is why it was so funny when Cherry Red released a "best of" CD a couple of years back. Having said that, our first recording was actually "Swamp Baby" which the record company paid for us to record just for the Blood On The Cats album. After that we did the 4-track EP Morbid Silence then the live album Untamed Culture. I can't actually remember why we split up. 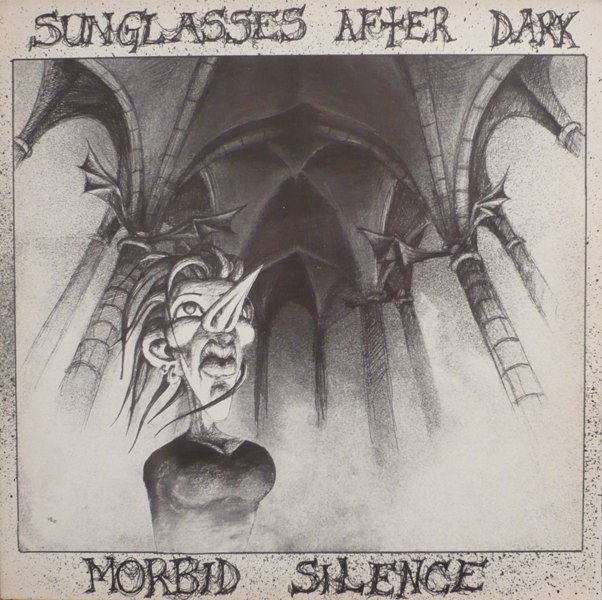 How did you get involved with Demented Are Go?

They supported us at some gig in Fulham (I think it was at the Windmill or The Windsor Castle...something like that). It was their first gig outside Cardiff and they'd brought a coachload down with them - we just hit it off straight away. I vaguely knew Ant (Thomas) before that cause I used to see him around at gigs - he used to come to see Sunglasses After Dark quite a bit in the early days.

How many of there albums did you play on?

I was on their first four albums, then played again on Hellucifernation.

You also used to play live with Demented. Any funny stories?

Too many to even start to think about! Before I even joined up with them I was up in Cardiff for a couple of days, hanging out with Ant, Mark and their mate Steve Mannings. We had done a load of mushrooms and went round to Sara's flat (Ant's girlfriend). It was about midnight and she was asleep and had to get up for work the next day so she was pretty pissed off with us and we had to go into this tiny little box room that was just big enough for a double mattress on the floor. We were supposed to be being quiet so she could sleep but we were giggling like a bunch of schoolgirls. The mushrooms were making us feel like we were made of rubber and we kept throwing ourselves against the walls to see how far we would bounce off them. Sara was even more pissed off with us the next day. That night was the inspiration for Sparky to write Rubber Buccaneer.

Have you keep in contact with the members over the years?

Sort of...I see Ant quite a bit and bump into Sparky every now and then. Facebook makes it easier - I "chat" with Graham, Lex and Criss Damage. When I was in New Zealand I bumped into Simon Crowfoot who had moved over and was living in Hamilton down there. The guy I'd really like to catch up with is the old bassist from the Day the Earth Spat Blood and Orgasmic Nightmare days - Billy from Swilly. I lost touch with him when he moved to Chicago with his wife Maggie. I think they've split up now and I'd love to see him again, so if anyone is still in contact with him, point him in my direction please!

What have you done since Demented Are Go and what does the future hold for Simon Cohen????

I joined up with this band called Macavity's Cat, who were a skiffle / cowpunk sort of band. They were so much fun to be around and we toured pretty much continuously for the next 8 or 9 years. We were signed to a Dutch label (Music and Words) so we spent a lot of time in Holland and Belgium etc as well as doing a Sunday lunchtime residency at the old Mean Fiddler. After that, I had a band called Rubbish for a while, then I started Some Dogs back in about 2000 with my old pal Mr Sweet. We just played punk cover versions of cheezy country classics like Stand By Your Man and Convoy. We had Nic Pecham and Ditch (both ex-Big Boy Tomato) on bass and guitar and Mystic and Billy-Joe (ex Macavity's Cat) on vocals and drums. I left them in 2004 and moved to New Zealand but the band carried on until 2008. While I was living in NZ I started another country/punk band called The Bilge Rats. I moved back to London just over a year ago - The Bilge Rats singer Finn is living here too and we are in the process of trying to put another band together - a bluegrass/punk crossover this time. We've got a banjo player (Tom Spencer from the Men They couldn't Hang) and I think that Nic from Some Dogs might be up for doing the bass - so if there are any drummers or guitarists reading this who fancy playing in a punk/bluegrass band...get in touch! 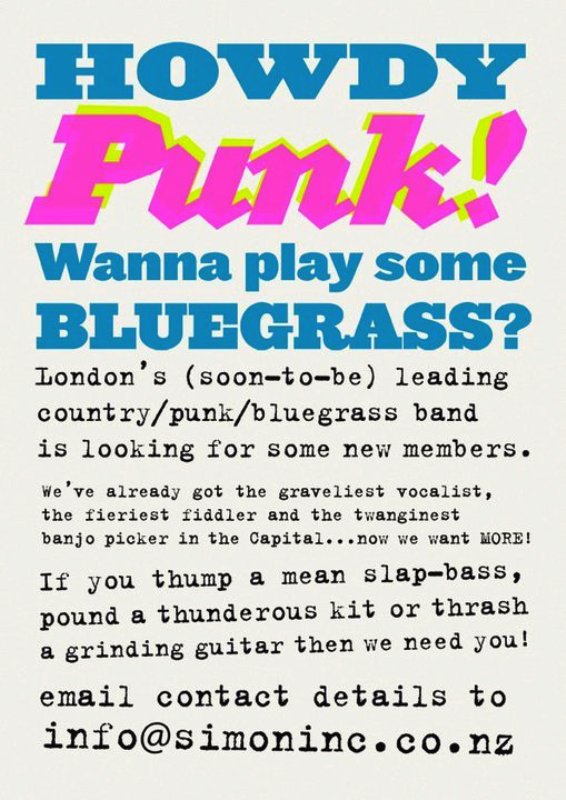