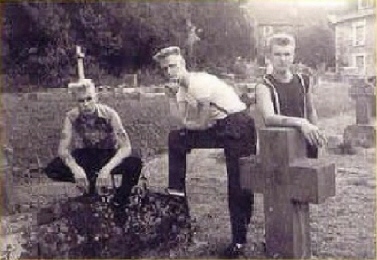 The Sharks were formed in the late 1970's by guitarist Alan Wilson and were playing straight  50's styled Rockabilly. A line up change in 1982 brought in Steve Whitehouse (b) and Paul 'Hodge' Hodges (d). Within 2 weeks the trio had not only recorded their first album, but had also signed a deal with Nervous Records - a new label that was spearheading the Neo-Rockabilly movement.

Their first release "Phantom Rockers" was a huge success in 1983.But after a few months the band split after a trip to Holland. Whitehouse went on to form Frenzy whilst Alan Wilson set about a career in sound engineering and producing.

It would be ten years before the Sharks came back. Gary Day (b), Ex-Frantic Flintstones replaced Whitehouse and the Sharks issued a new record.. After Day´s departure, Whitehouse came back again for a new album and gigs. The band has never officially split, but  they have not performed since 1999.