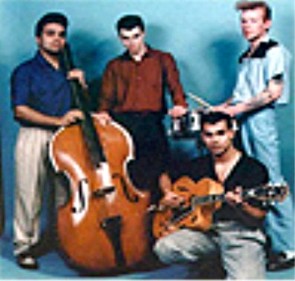 The Ricochets were definitely one of the first Psychobilly acts, mixing Rockabilly with some Punk attitude . The lineup included the brothers Steve (g) and Sam Sardi (b) and  Dave Jones (v). As time went on, the trio decided to a drum and find a guy called Steve Meadham (d). They were the backing band for Marney Webb and were named  " Pink & Black" at the time. They went on to change their name and recorded some tunes. After the positive response from the two tracks released on "Hep Cat Hop" the quartet produced  an album under the guidance of Roy Williams. "Made In The Shade"  (1982) became an all time classic that had a huge impact on the Psychobillly and Rockabilly scene .

However the lads decided to go their own separate ways. Sam Sardi gained fame with the Guana Batz and Steve Meadham joined The Meteors. The Ricochets were done until 1992 , when a second album  followed. In 2004 the Ricochets started to tour again all over Europe.