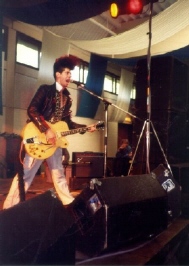 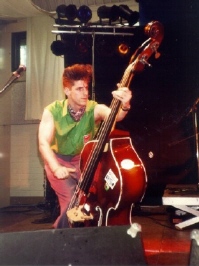 The Scottish Psychobilly trio were originally formed around 1988 by Paul (g/v) and Lee Paterson (b/v). The two brothers were joined by Johnny Maben (d) and released their debut vinyl "Munster Madness" in the same year.

Combining hot Rockabilly music with sci-fi and b-movie lyrics, adding radioactive energy and Paul Paterson´s excellent guitar work, made The Radium Cats to one of the best Psychobilly acts of the late 80´s / early 90´s. Their special and very unique sound plus their their reputation as one of the better live acts, made them very popular among both Rockabillies & Psychobillies.

In 1992 they released their second and last album " Other Worlds " on Nervous Records with Mark Carr on drums. Two years later the band split up. Paul Paterson has joined the authentic Rockabilly band Hi-Voltage while his brother Lee teaches 1940´s swing and Jitterbug dance.