( GUITAR MAN AND VOCALIST OF THE LUCKY DEVILS )

Hello Phil, firstly tell us a little bit about the Lucky Devils. When and how was the band formed?

Well, with Ricky, who plays drums in the Lucky Devils, we were playing in a rockabilly band called Mystery Train. I was only playing the guitar, didn't sing on that time. But after a few years, what we played seemed a bit too slow to us, the singer didn't want to bring new and dynamic material, so as a good rockabilly band, we mainly played the same old covers, brought a few gentle originals. Moreover, on that scene, I couldn't change a note in a chorus if we made a cover, or I'd see guys comin' after the show to tell me I didn't play the cover EXACTLY like the original, creativity was a bit limited. In 1998, as the singer didn't want to change the style, Ricky and me had to quit (the bass player had stopped before us, he plays now with Banane Metalik), and decided to start another band with a dynamic and powerful style, to create our own songs, and to play a few covers that we'd totally change from the original. We wanted to keep a rockabilly influence too, so our style was between Neo-Rockabilly and old school Psychobilly. We found a bass player (Vivien) in 1999 and the Lucky Devils were born!

How would you describe your sound?

It's Psychobilly I think, very powerful and dynamic, but we try to keep a clean sound, melodious vocals and the "billy" touch that swings, not to play "Punk-a-billy" or "metal-billy".

When did you start playing guitar and how many guitars do you call your own?

I started playing the guitar when I was around 10. On that time I learnt the basis, after a few years I reproduced on my guitar everything I could hear on my records. Then I mixed everything I learnt, kept what I liked the most of what I had heard and add my own touch to have my own sound.
I have now 5 guitars, but for the Lucky Devils I always use my Gibson Chet Atkins Tennessean.

What are your Top 3 favourite guitar players all-time?

How did you get into the Rockabilly / Psychobilly thing?

In 1980 my sister won a record on a radio show, it was the Stray Cats' 7´´  Runaway Boys/My One Desire. It's been like a revelation to me, I was only 9 years but it baffled me! Maybe the reason why I started learning how to play the guitar...

What are your main musical influences?

For the Lucky Devils, there are lots of bands influencing the style : the Krewmen, Rev. Horton Heat, the Happy Drivers, the Quakes, the Stray Cats, the Surf Rats... all the powerful but clean stuff we like and influenced our way of playing our instruments!

The band has released three albums so far. Black With Flames and To Hell also catch everybody´s eye with impressive sleeve designs made by David Vincente and Pascal Millet respectively. How did it happen?

We were recording our second album, and we were looking for something for the sleeve, not a picture of ourselves, somethin'else... Something that would be linked to the Kustom Culture maybe, as the album would be "Black with Flames". On the web, I found the site of a French guy who drew fantastic stuff as his hobby, but it was very professional. We talked a bit by mail, and one day as I was on holidays in the South of France, I noticed the name of the street were I just parked my car, that name rang a bell to me, and I said to myself "Shit! It's the address of David VICENTE!" So I searched a bit and found the shop in which he was working for his father. I entered and found him, we talked a bit and decided to meet on the next Friday in a diner-bar, where we talked a little, drank a lot and became real friends. It was just before he got signed by a big German company. Then he made the sleeve of our album and the illustrations of the booklet. He's a  real cool guy and fame didn't change him. We meet from time to time when chance allows it. Last time was in Berlin, last summer.
Concerning "To Hell", I just asked Paskal, who's a friend for years. I first met him as he came to Lille for a concert with his band, that was
called "the Rippers", it was in the late 80s or early 90s. I think he was the only one who could make a devilish sleeve corresponding to the title.

The band did also record some extraordinary cover versions of AC/DC, Nirvana and Blondie to name a few. Who came up with the idea to cover a Hank Williams song? Is there a special story behind My Sweet Love Ain´t Around?

We really love Hank Williams. The lyrics are often so desperate, sad, and his voice seems to cry! And what's strange is that he sings those lyrics on a happy music, with a violin full of joy etc. So we wondered how it could sound if we changed the original chords for minor chords, if we adapted the vocals melody and play it all a bit more rageous and desperate. We liked the result and kept it for the album. If you compare the original to that version, you wonder if it's the same song.

The Lucky Devils are based in Lille, France. Please tell us something about the current French Psychobilly scene.

When we started the band in 1999, the Psycho scene had almost totally disappeared. French people had to go to Belgium, Holland or Germany to see concerts and festivals. There were a few guys remaining from the beginnings, a few bands but no place for concerts, no festivals etc. For a few years, it seems to grow a bit, concerts are organised in different parts of the country, sometimes even festivals, there are people giving their time and energy to see their music rise again. Thanks to them, new people discover the style and like it, and there are more and more people in the scene. Some bands help to it too. We were sometimes reproached to play in "normal" bars for a "normal" audience, but thanks to bands like us, people can discover a style they didn't know, and kids can join the scene and make it live! Moreover, the contact with the audience in such places in not the same at all that in festival, where the audience is far form the band. There are more and more Psycho bands appearing too. It seems the scene is bigger and bigger, maybe because there's a kind of "Rockabilly/Psychobilly/Punk" fashion these days too. We'll see if it lasts!

OK. Let´s let the cat out of the bag. The Lucky Devils are about to release a new album in the near future. Do you have any details for us?

Hey! That was supposed to be a secret! OK, we start working on a new album that should be ready for 2008. We take our time to make things the right way, as we always did. It should mainly sound like the proceeding one, same style as a whole, powerful but clean and melodious, with a majority of originals you'll hear once and can't get out of your brains, and a few surprising covers. And there should be a great cover drawn by an excellent graphist, but we'll try to keep the secret!!! 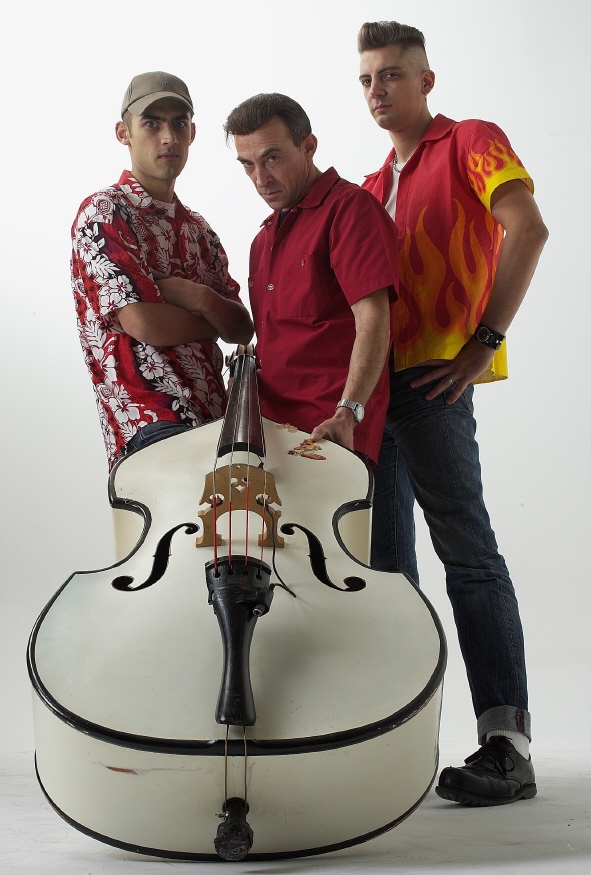 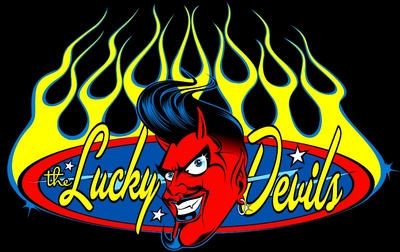