When and how did you get interest on Psychobilly ?

It´s hard to answer without offending someone. I started with a little record shop for collectors in the Marktstrasse (Hamburg), primarily specialising in Rock'n'Roll, Rockabilly, Neo-Rockabilly, Punk, Psychedelic, Garage long before the term Psychobilly was established. I also started to import records from the new British Neorockabilly movement and its record companies. I established contact with Nervous Records since the days of the "Rockabilly Guy" single (1980) and also with ACE / Chiswick a little bit later , who are best known for their early  Meteors releases. Major company records from the likes of Stray Cats and King Kurt were available anywhere, but the releases of the small, independent record companies were only gettable at my shop back in the early days. I established "Wahnsinn" back in 1982 together with a friend of mine. I was responsible for the music section and he made the comic section. We expanded the range of goods in the music section and we started to distribute British music magazines like Flexiepop etc. The key implementation was the mail order service as it enabled me to take over the distribution of Germany for some UK record labels and selling records nationwide. There are releases, on which I have distributed two-thirds to the German scene.

In early 1985, you have released on the new formed label Wahnsinn Records the debut platter of the P.O.X., entitled It´s So Dark. What was your inspiration to form a record company. How did you get in touch with the lads of P.O.X. ?

I was bothered some time, that there´s no German Psychobilly band and most of all that there was no Hamburg Psychobilly band. I was looking for such bands via my mail-order and some advertisement in Spex. I received loads of demo tapes, including a shambolic recording from the Psychobilly Orchestra X , based in Hanover. They also had added a band story on toilet paper, which was pure Psychobilly itself.

A friend of mine tried to do a gig with the Guana Batz in Hamburg at the time and the P.O.X. was finally booked for the support slot. The Guana Batz didn´t appear, but P.O.X wanted to perform. After never-ending telephone calls, we did a free gig with the P.O.X. at the Knust about midnight. Together with the audience of the Guana Batz gig we went to the Knust and the rest is history. The first gig with a German Psychobilly band was done.

I booked the Hamburg Ultraaschallstudio and It´s So Dark was recorded and mixed a few weeks after the gig (late in November). Needless to say that the P.O.X were late and there were only 5 and a half hours left from the originally planned eight hours to realise the whole thing. The mini- album was released at the first German Psychobilly Festival at the Hamburg Fabrik in January 1985.

How difficult was it to realise the festival?

Difficult is the wrong term. It was more like to be thrown in at the deep end. Nobody knew what would happen, how many visitors would come, would they like it. I had to run the risk with the fees, backline, traveling and accommodation all by myself. After watching the hordes of flat tops and bleached denim waiting at the Wahsinn shop in the early morning, I knew it would be a "Wahnsinn" event at a sold-out venue.

Taking a look at the line-ups of your festivals, It´s impressive to see that you has always been able to introduce newcomers of the scene, which later became quite popular. Demented Are Go! ( about a year before the release of In Sickness And in Health), Torment, Skitzo and Rochee & The Sarnos to name a few all played their first show in Germany at your festivals. How did it happen?

The line-up of the first festival was a no-brainer. The P.O.X had to play and Frenzy´s Robot Riot was the best-selling record in my shop at the time. So Frenzy had to be there too. The Voodoo Dolls from Sweden came from mated record label Sunrock and The Waltons were booked from the mated Berlin record shop Vinyl Boogie, which had pioneered the Berlin scene. Roy Williams with his Wild Wax show was booked for deejaying, but finally wasn´t able to come. Somebody brought in The Tranquillizers and all of a sudden they performed three songs without my agreement.

It was the norm for the next festivals that every new band on Nervous Records made their first German live appearance here in Hamburg. I´ve has listened to these Demented Are Go! tracks on Hell´s Bent on Rockin´ and I wanted them badly. They came with their on Chaos Fan Club from Wales and left a destroyed hotel plant. That was arguably the Magical Mystery Tour of Psychobilly.

Besides the mentioned earlier Demented Are Go!, Skitzo, Torment and Rochee & The Sarnos, Batmobile, Pharaohs, Get Smart, Voodoo Dolls and the Deltas also had their first German gig at my festivals.

What was the most memorable festival?

There was no most memorable one. They all meant loads of fun at the particular time.

Did you wanted to book any bands for Hamburg and it didn´t work out?

Wahnsinn Records changed to Maybe Crazy back in 1987. What were the main reasons for changing the name of the label.

The split with Wahsinn already happened in 1986. The differences between my ex-partner and myself were getting bigger and bigger. It didn´t work anymore. There were the Yuppies and alternate customers, looking for the comic stuff and on the other side there were the Billies, interested in the music. I finally quit and me and my wife established together Maybe Crazy next door. Now we were able to present and realise the whole thing the way we wanted to. After a dramatic increase of  rents in our quarter, we had to quit the shop in 1991.

Maybe Crazy released the debut albums of the Scannerz and the Scallywags and was also responsible for the first Mad Sin platter Chills And Thrills In A Drama Of Mad Sin And Mystery. How did it happen? Are you proud of having discovered the most popular German Psychobilly act?

It´s some sort of satisfaction of having discovered the first German Psychbilly band The P.O.X. and of being part and having produced the most popular German Psychobilly act Mad Sin back in their early days.

When and why did you stop Maybe Crazy Records?

This is a good question. I was sick and tired of being the asshole for all the artists , no matter what have you have done as producer, label or friend for them. Secondly, it was the start of the digital era, people started to copy CDs and as an Indie record company you didn´t sell enough records to even reach the break-even point. I stopped the record company around 1994.

When was the last time you´ve visited a gig ? Did you enjoy it?

I´m still visiting concerts every week and music is a big part of my life. I´ve rediscovered many friends and mates from my roots, thanks to MySpace and other internet sites. I´m very happy that Psychobilly has weathered the quiet years and is back as a big part in the international culture.

Here´s the final question. Do you have any plans to be an active part of the scene again?

Oh yeah! First of all Wahnsinn and Maybe Crazy will never come back. They were a big part in music business history and a revival would be some sort of grave robbering. I will use my experience for new projects, that will be part of the new Psychobilly movement. 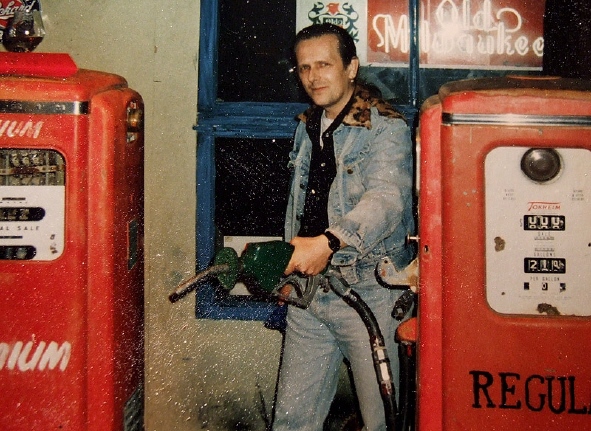