Do you remember when you met Rochee  for the first time? How do you get to the job as  a "manager " of  Rochee & The Sarnos?

I met Rochee for the first time at a warehouse party near Liverpool Street station in London. It was an all-nighter, and Ray Frensham, who had released The Rochee & the Sarnos EP, introduced me. I was putting together an all dayer in Northampton, and had booked the Sarnos to play there. We were both pretty pissed at the time, and the first conversation was basically a series of grunts! I also met Rob Glazebrook the same night. This would have been in late 1983. Ray was managing them at the time, so it was not until a while later I became manager. I just kind of drifted into the role.

What was your job as the "manager " of Rochee & The Sarnos? Did you have to organize the gigs or did you have to discuss possible record deals with the band members?

As manager I just tried to get the band gigs, and organized getting there etc, along with Rob who was just good at that sort of thing. I was involved in the negotiations for the second album, which never happened, so I was probably not very good at it! We were going to call it “Songs by the Fireside with Lord Herbert Sarongster”. I think “It’s like Light Bulbs” was another title we discussed, or even “Astrakhan” – and have a limited edition faux-fur cover! I think our ambitions may have exceeded the record company budget - LOL

I remember you told me about an incident at the Klub Foot. The band played on the 10th anniversary of Elvis’ death, and Herbie lead a tribute to the king…by eating a cheeseburger on stage. Do you have other memories like this, special events or highlights in the history of Rochee & The Sarnos?

There were lots of funny things that happened. We played a gig at an all dayer in Birmingham with Ray Campi, and Dick from Demented Are Go introduced me to the delights of Guinness and Barley wine during a lunchtime session in the bar next door to the venue. Needless to say it was a good way of getting a head start on the drunkenness. I remember laying on the floor of the dressing room when Ray Campi came in with his expensive video camera, wanting to get some shots with the band for his own collection. He looked horrified when I staggered up from the floor and offered to be cameraman; he just stood there with gritted teeth as I swayed around with 100s of dollars worth of his camera.

The all dayer I organized ended up with the band jumping off stage and having a punch up!

Another time we were on our way back from a gig in Brighton, supporting the Blubbery Hellbellies. We were in the van, which was filled with booze and smoke from the odd Rock n Roll woodbine, when the police pulled us up. When they found out we were a band, one of the coppers asked who the singer was, Herbie was in the front seat, and said, in a very camp voice "I am"; the cop said "Give us a song then", so Herbie sang the Elvis song "Young and Beautiful" to him. He was about 12 cm away from the cops face, and sang the whole bloody song gazing into his eyes, it was hilarious. The policeman though so too, and we were sent on our way with no problems at all.

There was a gig at Cheeks nightclub in Deptford, South London where Herbie came on as Tex Twitter - country legend. He had a gold lame shirt with white fringing on, and when he took his jeans off, which he inevitably did, he had matching boxers, with TEX emblazoned on the back in silver glitter. He made his entrance through the crowd riding a pantomime horse. I was the front half and our mate Radar was the back.

The best gig of all was probably the Isle of Wight weekender in 84. The band had the lunchtime graveyard slot on both Saturday and Sunday. Ten minutes before they were due on stage, the hall was empty, five minutes later it was packed. They did a straight Rockabilly set on the Saturday and a Sarnos toga party on the Sunday, both sets went down a storm, the crowd were going wild - it was a real highlight of the weekend.

You were also the self-elected president of the fan club – known as Perry “El Presidente”. Tell us about the foundation and the history of the club. I guess alcohol had to do something with it?

My first contact with Rock n Roll was a gig by the Sunsets, in a small village hall in Bedfordshire. I was about 14 at the time. I got to know the guy who was promoting it, and within a month I had become the roadie for his record hop! It gave me a real head start in Rock n Roll, as I could not have afforded to go to half the gigs I did without that job! My first Psychobilly gig was The Meteors at The Hope & Anchor in Islington, London, about the time Meteor Madness came my mate and I let photographer Paul Slattery in front of us to take the now legendary "Psychobilly Kid" photo of Fenech that appeared in the newspapers, and on the cover of "Sounds" music paper.

You live in Portugal right now. I know three's a rockabilly scene in Spain including a big yearly festival. But what about RnR in Portugal? Are there any events and/or bands?

There is a scene up in Lisbon, but as I am about 250k away from there I have not been up there yet. My mates Boz & Lyn, who have a holiday home not far from here went up to a gig in the summer, and said they enjoyed it. The Meteors played not far from here last year, but we only found out about the gig about a week after it had happened! There are certainly a few bands – I saw one of them at the Rockabilly rave just before we moved over here.

What are your favorite bands? Are you still interested in Psychobilly/ Rockabilly?

Still love the music, favourite bands other than the Sarnos of course, Restless, The Jets, The Crawdads, The Highliners, Frenzy, Dave Philips and the Hot Rod Gang, Polecats, Crazy Cavan, Red Hot n Blue, not forgetting the Playboys – Rob would never forgive me!

What do you think is the main difference between the Psychobilly / Neorockabilly movement back in the 80´s and right now?

Hard to answer this as I have not been to a psychobilly gig for years, but between the start of the scene, when I first saw The Meteors, and the mid nineties it certainly got more “punky”, both the music and the style.

I know you are still in contact with the lord himself. Are there any more friendships/relationships, dating back to the good old days?

As well as Herbie, I still keep in touch with Rob – we lived in the same Street for years, until I moved over here in fact. I see Jamie occasionally when we visit the UK. I see Boz from the Polecats quite a lot as he has a holiday home over here. I have been trying to contact Mark Harman from Restless, who I have known for years, but have not caught up with him yet! Still keep in touch with a lot of old friends from the scene, but no-one that your readers would know.

Thanks for answering all these questions, greetings and cheers to Portugal. 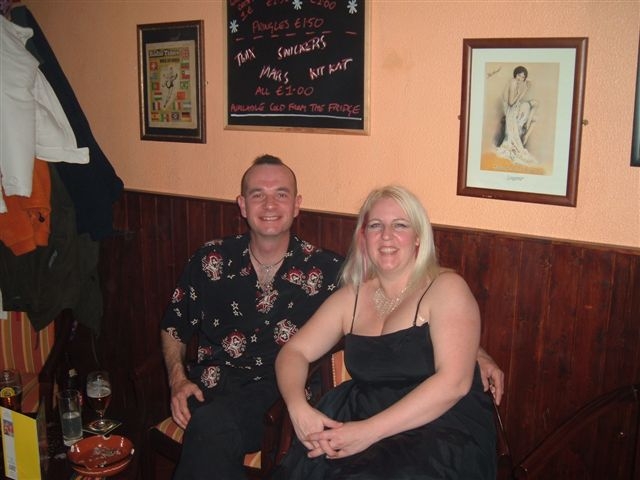