When and how did you become interested in Neorockabilly / Psychobilly music?

I have always liked Rockabilly music, some of the first records I ever bought were the cheap Pickwick Records compilation albums which used to feature Carl Perkins, Warren Smith and Billy Lee Riley amongst others. Psychobilly/ NeoRockabilly was a natural progression.

What were your favourite bands and albums?

That is really difficult, as so much great music was being released. The Meteors were my favourite band at the time, I really liked the Stampede album. The Ricochets 'Made in the Shade' album was in my opinion a classic. Demented Are Go's 'In Sickness and In Health' was a great Psychobilly album. I remember a friend of mine borrowed it and covered it accidently in hairspray whilst sculpturing his quiff! The Sting-Rays were a brilliant band, in fact I could go on and on.

What was your main inspiration to start a Rockabilly / Psychobilly fanzine back then?

The lack of coverage of  Psychobilly music/bands, the English music press mostly ignored it. Sounds (a now defunct English music paper) once featured Bal of The Sting-Rays on its cover for a Garage special but apart from the odd album/gig review that was about it. I wanted to read about Psychobilly, there were also no Psychobilly fanzines so I decided to start my own.

Tell us a little bit more about the history of "The Crazed". When did you start it? How many issues were made?

The Crazed started in the mid eighties and I released four issues. The main reason for starting The Crazed was to feature interviews with Psychobilly/Neo Rockabilly bands, basically to give them a voice.

How difficult was it to realise the respective issues? I guess it needed a load of hard work and passion back in the good old days without printers and internet?

When you are doing something because you enjoy it,  it doesn't seem like hard work, but it did take a lot of effort, numerous telephone calls arranging interviews, loads of typing and designing the pages and finally taking it all off to the printers. After all that you have then got to get people to read it!

Which of your issues are you most pleased with and why?

Issue two was my personal favourite, it featured interviews with The Meteors and Guana Batz amongst others, it was a vast improvement (in my opinion) on issue one. It was the first issue that I did face to face interviews with bands as opposed to the postal interviews (lists of questions sent to the bands)  in issue one.

Which of the interviews you have made, do you like best?

I enjoyed mostly all the interviews, interviewing P Paul Fenech was an obvious highlight. Attempting to interview The Coffin Nails in their yellow van which they called the Psycho Bananna outside The Klub Foot was an experience especially when Humungus did his legendary Lager Dance!!!

Were there any things you wanted to realise for The Crazed, but you couldn´t do it for whatever reasons?

I wanted to include a flexi disc with an issue of The Crazed, I discussed the idea with Boz Boorer who was keen to let me use one of his solo tracks and also a track from the Wigsville Spliffs. Unfortunately The Crazed finished before this could be done.

What were the reasons to stop  The Crazed?

Good question! There was no specific reason The Crazed finished. The Klub Foot closing obviously didn't help and I had  interviewed most of  the bands I wanted to. It was also quite costly and time consuming.

What do you think about the current scene?

It's great that the interest is still there and that it has moved around the globe. Some brilliant music is still being made I enjoyed the last Nekromantix album and I thought Sell Your Soul by Creepshow was pretty good. 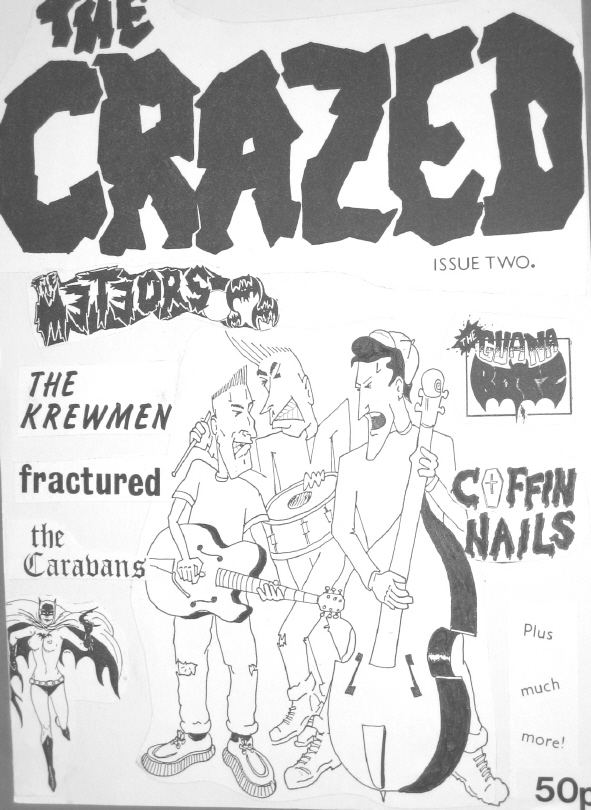