You are just back from touring the East Coast. How did it go? Where’s the action on the East Coast? Are there any major differences between gigging the West Coast and the East Cost of the United States?

The east coast tour was a success. The best cities were Chicago, Montreal, Toronto, Buffalo, New York. The difference is that the scene is not as big as is it is out west and the bands tend to look and sound different.

Some years ago you packed your bags and went. How would you characterize the scene today in America? Hot spots? New bands you like? Are you optimistic (or not) about the future of Psychobilly in America?

Its a real shame that it wasn't popular 20 years ago. If only people could have seen those bands in their prime. Its fun to see them now, but when we were young and had all our hair:-) The hot spot is still LA- On the same night you had The Horrorpops at the Avalon and The Quakes at the Fonda theater and both shows sold out. The scene is very big there. I like bands like the Limit Club (not just because my drummer (Ed: Juan Carlos) plays in it:-) The Koffin Kats are good. The Curtains from Chicago, there are a lot of good ones. My main criticism with new bands is that they are all psycho and no “billy”. They know the Misfits but not Gene Vincent-they know power chords but they don't know a walking bass. 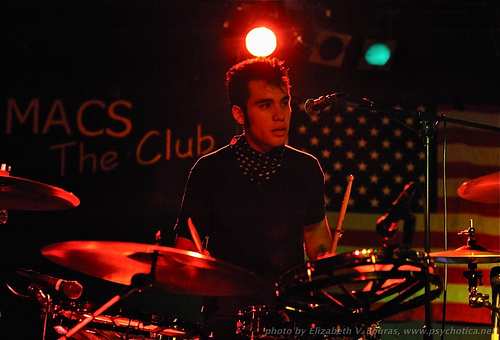 About three and a half years have gone by since our last interview in December 2005. So can you update us about what has been going on with The Quakes since then? Lineup changes, etc.?

So many times I get that “line up changes” question yet I have had far fewer changes than some of the top bands. Its hard to keep a band going for over 20 years. How many marriages last that long? There will always be line up changes but since I write all the songs it will always be The Quakes.

Speaking of the past, do you remember “CASE 300“? It's scratched on the vinyl of The Quakes’ self-titled debut 12'' vinyl. Is there a special story about it?

Yes that was the case number of our immigration status in the UK. They were not going to let Rob into the country (Rob Peltier coming to London) to record the album and it was scary for about a week. They finally let him in:-)

Anyway, you also re-obtained the rights of Quiff Rock, originally out on Tombstone Records in 1995 and you re-released the album on your
own Orrexx label in 2007, including eight bonus tracks. Why and how did it happen?

Klaas from Tombstone was kind enough to sell me the rights back to the album. The album was a little hard to find so I wanted to re-release it on my label and add some tracks and pictures in the booklet. I happy with the result.

Let's talk about the brand new Quakes CD, entitled Negative Charge. Are you pleased with the final result? Do you feel that the album is a reflection of your current attitude towards life, your current view of things?

To be 100% honest, I'm not happy with how it came out (you never are) I ran out of time and money. The guy I usually record with in Las Vegas is unavailable these days for bands so I had to find some new people to work with and it was hard. We started with one guy and then it wasn't working out and had to switch in the middle. I learned a lot of how NOT to record the next one. I think the songs are good but I could have done better recording them.

Despite the fact that the present Quakes lineup--consisting of Kenny Hill on bass , Juan Carlos on drums and yourself on vocals and guitar-has been together for a couple of years, Negative Charge features an extensive cast of studio musicians, special guests.

It was good to collaborate with other musicians and I think I will do that again next time. When the album comes out on itunes in about 6 weeks, there will be a bonus track. It is an extended mix of Seven Seas Alone-Its the only thing I was real happy about:-) I'm not a very good salesman for my own stuff:-)

Also, you slap the doghouse bass yourself on the majority of the tracks. Are there any particular reasons for that?

The simple answer is that Kenny lives in San Diego and could not be there for the entire recording process. I prefer to play the bass on my own songs. I make demos of them and I know what I want. My bass playing is nothing spectacular but it works for my songs.

There's another question I'm dying to ask. Songs like Master Planned Community on the latest release or songs like U.S.A. from Voice of America or Clone from Last Of The Human Beings , just to name a few, definitely include a message, arguably even some sort of criticism of society. Do you think that Psychobilly is or should be a “politics free zone“? What’s your personal point of view?

Psychobilly should be a “stupidity free” zone. How about a moratorium on songs about zombies driving hot rods? Most of the politics in my songs go completely unnoticed. There are several more potent songs that you could have mentioned here. I write about things that are pertinent to me and my situation. The politics in my songs are very subtle and mostly deal with social things and not things like raising taxes etc.:-) The guys on the message b-o-r-e-d-s saying there should not be any politics in psychobilly are THE ones that have written 15 songs about some monster. That's just too easy. There are no rules for psychobilly period. The Clash had loads of politics in their songs but you didn't really notice them because they were just great songs. They were not ranting. Of course psychobilly is about having fun but its should have some weight to it from time to time.

What are your favorite songs on Negative Charge and which songs do you think will be an inherent part of the band’s live set in the near future?

I like Turn on you tomorrow. I don't know which ones we will do live. When you have so many albums out and you are playing a hour long set, you have to decide what gets left out rather than what to include. I try to do most of those ones people expect to hear and then songs that work in the set. On this last tour we added Spirit of the cat in addition to Seven seas alone. Not all songs work in a live situation.

The new album includes twelve originals, written by yourself. It marks the first time that a Quakes album has not included a cover song since 1988. Why?

Honestly, I didn't want to deal with the licensing process of doing a cover and I need to stop doing covers of 80’s songs because everyone else is doing it now.

What's next? Any plans for later this year? Tours, festivals?

We are not doing anything this summer. I'm hoping to set up a European tour in October. I need to find a tour organizer. Also I'm hoping to get around to making some videos for You Tube, I just got a video back from Chris Van Cleve from 1986 and its hilarious:-) It is The Quiffs with Dave Hoy on bass and another guy on just a snare and cymbal. We are dressed in our peg pants and bowling shirts:-) Look for an east coast tour report on my web site soon with pictures from the tour. THEQUAKES.COM Other than that I plan on doing a lot of camping and fishing:-)

THE QUAKES ON MYSPACE