As everybody knows The Radiacs are back. How did the comeback gig in Manchester last month go?

We had a wicked time, a great crowd of old and new faces, good reviews, what more could we have asked for (thanks to everyone again!!!).

Let’s turn back the clock. When and why did you start playing bass?

I was about 16 or 17 years old I didn't have a bass then, just an old acoustic guitar with a made up bridge, I drove my Mum and Dad bonkers as I played along to records and tapes.  Why?? I saw Nigel Lewis with the Meteors at The Limit club in Sheffield, a night we'll all never forget but that's another story as they say!!

What are / were your main influences as a bass player and who do you think is the most underrated bass player in Psychobilly history?

Nigel Lewis is my biggest influence, It's just the way he plays it's so different to everyone else in my opinion. Music wise it has to be( 50's Rock and Roll, Rockabilly, 70's & 80's Rockabilly, ) Polecats, Shakin Pyramids, Meteors and the Cramps, punk, New wave, Metal . What can I say any influence helps you as musician. Paul Harman is the most under rated Bass player.

The Radiacs originally started as the Epileptic Hillbillys in 1986. Why did you change the band name and who came up with “The Radiacs” moniker?

Our management at the time (Take Two Promotions) thought it would help the band cross over in to the mainstream, major record labels etc. It was Dale (Williams) who came up with the Radiacs name.  I still have the rights to the Epileptic Hillbilly name.

Sheffield is not only the home of The Radiacs, but also won’t be forgotten due to the live recordings taken at the Take 2 club. Tell us a little bit more about the venue and do you remember how often The Radiacs played there?

I worked at the Take Two club as a door man, at night and booking agent in the day  which is why so many Psychobilly bands played there as I booked them and Take Two paid for them and that's why the Radiacs got all the support slots,  Punk or Billy gigs we must have played there 100's of times.. Take Two it's self started out as rehearsal rooms, then opened up as a club that could hold about 300 people.  Everyone played there at some time from the Stone Roses, Dr Feelgood, Oasis, Uk Subs, Mac Lads, Tin Machine (David Bowie), Conflict, Charlottens and Bjork with the Chills. The list goes on...

The Radiacs eventually released their debut album, Hellraiser,  in 1989. How did you get the record deal and what’s your favourite track on the album?

The band were getting a lot of attention at the time, it was Link Records AnR who simply got in first.  They approached us through Take Two Promotions, the deal was done and we were put out on the Katz Keep Rockin compilation before signing up to do the Hellraiser LP.  My favorite hmmm.... well it's got to be Hellraiser the song and I Was Wrong.

You left The Radiacs and became a member of The Krewmen. How did it happen?

I was poached basically, the Radiacs played a lot of gigs with the Krewmen and one day I got a phone call from Reg McMillan asking me to go for an audition for them. 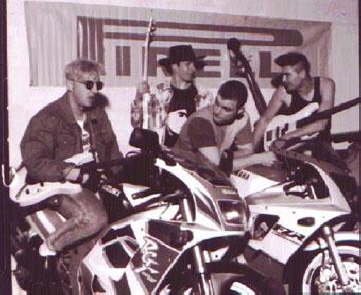 What’s your favourite release from your stint with The Krewmen and why?

Final Adventures, it sounded like the Krewmen, how it should be!!  Power was too far ahead of it's time so it has to be Final Adventures every which way!!!

Do you own a copy of “The Legend Of The Krewmen” –DVD? Any memories left from the video recordings?

No, but my son Steven (Cosmic Razor) has one?  I do have the videos though, the promo and Live At Billy's.  Memories hmmm... I was pissed out of my face, I didn't play that well the sound wasn't that good so it had to be dubbed over, Billy Oxley( Radiacs, Blue Devils, Thee Chills) got up & did a song with us a it was a crackers night.!!!!!!!

What was your last gig with The Krewmen and are you still in touch with any of them?

Do you know I can't remember??? I am going to say Hessen on the last tour of Germany in 96. I left 97 & got a job in a studio. So it would be around that time. Yes we still give each other shit ( like old gits)  on the phone, facebook etc.

You are also involved in a side project called Egor's Back Bedroom. What’s it all about?

Just havin' fun with music again really, trying new things and seeing what's possible and what's not, mixing styles with other styles that aren't supposed to go together. Revamping old songs from the early Radiacs stuff to Krewmen stuff. Tunes that didn't get out on disc.

Let’s take it finally back to the start. A new CD-EP, The Return Of The Radiacs, is out on Raucous Records, you will play some big festivals, including Pineda de Mar, later this year. Are you pleased with the new recordings and what will the future hold for The Radiacs?

Pineda De Mar will be the first time we've played as the original line up in Europe for over 20 years like the UK date.  We've also been approached by promoters in Italy, France and Germany and it's not only the big festivals we are looking at?  As for the mini EP! I think we are all very pleased with the outcome, it was recorded over 1 day and took 10 hours to be fair, so yes!!!  As for the future, there is a lot of interest in the band at the moment and as long as we (the band) can keep the peoples interest with new material and stage performances if the people want it we will deliver!!!

THE RADIACS ON MY SPACE

PAUL OXLEY ON MY SPACE