Who or what inspired you to pick up a double bass?

I played drums in a psycho band the Cutthroats, we couldn't find a double bass player, so I sold my kit to buy a bass. I had just started to knock about with Broomey of the Lost Souls, he showed me the basics.

Who are your favorite bass players?

Broomey, Fanthomas, Choppy, I saw Strangy play close up was impressed by him and with the amount he drank too and still stands on his bass! ACE! I like self taught players, even when they've just started playing, so many techniques, its great to watch.

We have only started playing again the last three to four years, we had to buy new instruments and everything, the band started as a four piece, but it was a bit heavy with two guitars, then Jim (Goodman) the drummer left at the end of 07, we found a replacement in Chris (Ives), he was the last drummer in Stench, a psycho band which imploded early 90s, which was the last band we all played in. Luna Vegas is now that line up.

What's been your best gig so far? Any funny on the road stories?

All have been great, except the ones where you haven't got a big pa, we have only a small vocal PA, you turn up and its a big room SHIT, we still have gone down well, I like the ones when people are wrecking, more energy! He he!

Any plans to play outside the U.K.?

Not as yet, but we want too, Daz ( Night) is blind and diabetic, so it take longer cause we haft to sort him out as well as ourselves, haha, we can't do that most of the time. We have been thinking of Belgium or Netherlands first, we would love to do Germany, we have had a lot of request to play there.

Without ass kissing I really like your first album " Strange Men Weird Women ". Were you happy with it? How's it selling?

Yes we were happy with it, we wanted to keep it basic, not much overdubbing etc, that album has all the songs we have played from the beginning, most of our songs are written to play live, so that's why the album is mostly up tempo, two tracks we did without the drummer, Demon Sitter and Jeanie Jax, he had just left. Western Star are happy with sales, enough to offer another album deal.

What was it like working with Alan Wilson --I have recorded with him and wouldn't want to record with anyone else?

How's the 2nd album coming along-when's it out?

We are looking forward to releasing this next year, in the first six months I hope. The first album had a lot of influences of other bands, this is more us, Luna Vegas. We are doing a few studio type songs for this album, which we wont be playing live.

I have seen your promo video for the track -Sixth Sense-any plans to do anymore?

Yeah, sure thing. We have some crazy ideas, Chris our drummer has just started messing around with the video side of things, a promo for the album. also we need something descent on You Tube. I believe Western Star might be doing another one, so we'll be doing a couple for that too.

When you guys are not gigging or recording as Luna Vegas what jobs do you do and what does 2009 hold for Luna Vegas?

I work in a machine shop with my good old pa, Chris works for a haulage company, Daz chases loft lurkers, whipping at them with his dog chain and half a baseball bat, i'm not joking, last year he had a spell when he was drinking and taking prozac, because he cant see, he started getting paranoid, at one point I thought it was a white coat job. He's ok now, that why I wrote that song Loft Lurker, the lyrics are blunt and to the point, he hasn't been that way since.
In 2009 we will just keep on working as we are, our destiny isn't in our hands, what comes along we just ride the waves, so to speak! When we first started Luna Vegas, we had a dream to fulfill, an album on a label, which we didn't do when we were younger, this we have done, everything now is a bonus! We have had a second shot and we are enjoying it. OH YEAH! 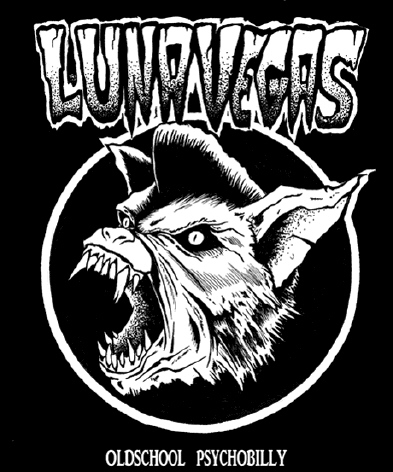