( VOCALS AND GUITARIST FROM THE ASTRO ZOMBIES  )

What was your main idea in forming a Psychobilly band? When and how did it happen?

Playing Rockabilly for many years before turned us really mad and Psycho. I’m fan of rockabilly music but used to listen to other style like  80’s psychobilly bands and punk. We started to play Rockabilly in a Psychotic way  in 1996 with a song called Vampire, I was just on rhythm guitar and vocals but our solo guitar man left the band cause he wanted to stay a pure rockabilly guitar player, then I tried to handle with lead vox and lead guitar too.

Who was in the original lineup and who came up with the band name?

The original line up was made of Bobby (me), Gaybeul on the drums and Blondo on double bass.

I had ( and still have) a book which talk about all those horror B-movies  from the 50’s to nowadays and I found a critic of  “the Astro Zombies” of Ted V. Mikels… It was so funny how it describe the scenes that I decided to see that movie and then when we were looking for a band name I just said “Astro Zombies” and it was done… but above all, our named is not from the Misfits’ song (which is a good song btw).

After the release of the self-titled debut EP, the Astro Zombies found themselves “In Heaven”, at P Paul Fenech’s recording studio. How did it come about? What’s the story of The Astro Zombies Are Coming?

We used to open for psychobilly bands like Meteors, DaG and more, and as we were big fan of the Meteors when we met P Paul Fenech he was really cool with us and helpy. So we thought it will be a good experience to record our debut album into his studio, and it was! We were really proud to record at “in heaven” studio and Paul was really friendly with us and did a really good job in a week.

Drummer Gaybeul and you also worked with P Paul Fenech on a couple of his solo albums, Screaming In The 10th Key and Fenechaphobia respectively. How was it to work with the godfather of Psychobilly?

Once again it was a really good experience, learning to wait backstage and playing headliner. We did couple of shows with the Screamers and recorded some parts of those 2 albums. I have to say that we were really proud to play with Paul Fenech and we got a big respect for him and what he did for us.

With the brand new Convince or Confuse out a couple of weeks ago, the band has released four studio long-playing records and the live album Burgundy Livers. Which one do you think is the best choice for starting an Astro Zombies record collection and why? What’s your personal favourite?

“Convince Or Confuse” is for sure the best, and the next one will better again. I always answer that the new one is the best one, but they are all good to me. the thing is that we have recorded 5 albums in 12 years so the first one is different than  “Convince or Confuse” which is more mature but it’s like a 12 years story of a psychobilly band with different musicians and different influences during all those year. I think doing the same album all the time mean nothing to me, and as you grow up your style have to grow up too .When I write a song I never ask to myself if it’s gonna sound like this or like that. It just come to me like this and I can’t control it... maybe tomorrow, I’ll write a hippie song, how knows?

Let’s talk a little bit more about the new album. Are you happy with the final product? Do you have any tracks to recommend for a first listen?

I’m really happy with this album especially the production is really professional. We went to a very good studio and the sound man who’s a friend of mine now is really cool and took a lot of time to try to understand my disturbed mind and how I wanted the songs have to sound or not. We spent a lot of time for this one but the result is really good. All the tracks are good to me and everybody should find a song to like as they all got different influences. I personally ( like most of the people as I guess...) like the Bang Bang cover song and Margarita with a fantastic fiddle part. I do like “Reality Junky” as well which is a cool song. The hillbilly “Fiddling And Picking” is totally crazy and “Women I know” in a Bo Diddley style.

The Astro Zombies have a very unique sound, a blend of varied musical backgrounds that’s kinda hard to pigeonhole. How would you describe the band’s output and what are your main musical influences?

My main musical influence when we started was Rockabilly and Psychobilly but punk  bands as well like Mano Negra . Now I’m really much more open minded, still listening to what’s new on the scene but I’m now listening music according to my mood and sometimes Ska or Punk rock, Swing and various styles can satisfied my appetite for music. I mean I give a chance to every kind of music and when I find something good I just like it without asking to myself if it’s psychobilly or whatever-billy. I just like it ... or not. That’s why you may be find lot of different kind of songs in our list and I’m proud of that various sounds and songs which make our own style.

The latest lineup change brought in ace bass player Mark Carew from the Long Tall Texans. How did it happen and how will it influence the band’s sound?

I crossed Mark many times in different festivals and shows and we always had fun together so I called him first and I didn’t had to call anyone else. Mark is a real nice person and we always have fun with a same sense of humour.

About the influence You will tell me when we record a new album together which won’t be long.... we got lot of  energy on stage and Mark, Markus and me always have fun to play live. Psychobilly is a live music, I mean I do like bands on stage without listening to them at home.

The hiring of Mark Carew also means that all three band members live in different countries (France, Germany and England). How difficult is to keep an international lineup together and what about rehearsals etc?

We got two hours each to reunite (by plane and car) so it’s not so long, just a lil’ bit more expensive and internet helps a lot. It’s just a different organisation but it works.

What’s next? Any plans for later this year?

We ‘re gonna play the Hollywood Showdown in September and spend a lil’ week in LA. Then Bedlam festival in England the week after and Speyer fest I Sold My Soul for R’n’R in October. We’ll be 2 weeks on tour in November in Germany, Tchek Rep, Austria, Switzerland and France. Then I hope December will see the first recordings for the next album... 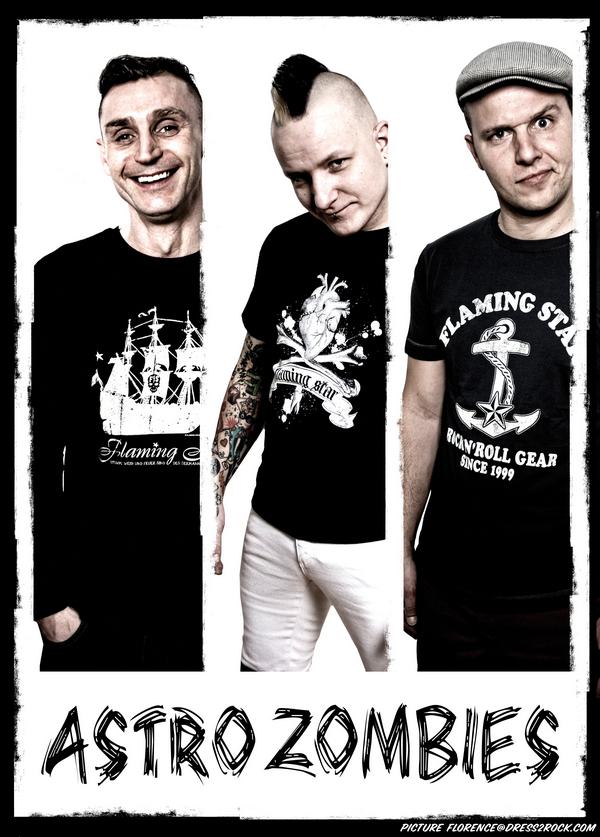