Hi Mike, how old were you when you started playing slap bass ?

Well when I was twelve I started playing guitar with Ian ( (Aitkin ), Spliffs guitarist ). But he was better than me. So as we wanted to start a band I played bass- first electric bass. Then when I was 16 I bought a double bass.

When did the Spliffs form and where´s the name come from ?

We formed in 1981. Line up: Ian Aitkin -vocals & guitar, Mike Lister- slap bass and Danny Mowl- drums. Which stayed together till we split. The name came from the back of a Freddy bell And The Bell Boys album cover.

You played at the Klub Foot a lot, what are your memories?

Every band that played got a great reception- it was awesome. Plus sharing a dress room with one of my heroes , Ray  Campi, was a special moment.

Yes, once in Berlin 1995 Wildcat Festival- Mad Sin and Guana Batz were there too.

Why and when did you split up?

We split in 1987 due to work commitments.

What happened after the split?

Well in 1989 we played at the "Live Over London" festival for Boz Boorer. Me, Ian and a guy called "Shoulders" on drums. Its out on CD, us plus Polecats, Texans, Fireball XL 5, etc. called "Bring Out Your Dead ". Then Raucous released on CD of stuff in 1995 and we played Berlin, as I mentioned before, and at a Raucous weekender in Leicester. The line-up for both these gigs was me, Ian, Boz Boorer on guitar and ex-Meteors drummer Woodie Taylor!

How did the recent (August 2008) Bedlam gig come about?

We did this as a favour to Toby and the boys who organise it. They asked if we could do it with the original line-up of me, Ian and Danny which we did.

What´s the future for Wigsville Spliffs ?

Well we now intend to carry on playing as Ian and I have been throwing around a few ideas and have wanted another crack at it for a while, but to write stuff a bit more Neorockabilly / Psycho material and now have Paul Richardson on drums. We are booked to play the Satanic Stomp in April 2009 and have had enquiries about gigs in America, Europe and the U.K.. So check out our MySpace site for updates and hopefully a new album next year! 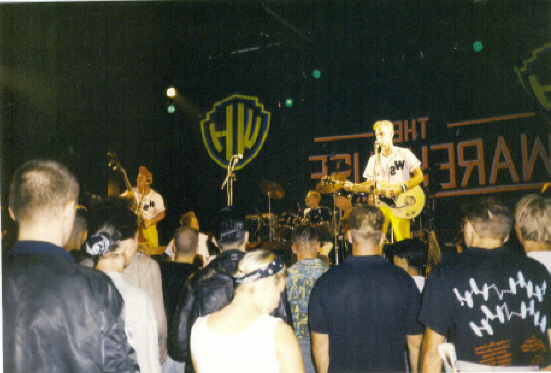