(SIX-STRING PICKER OF OF A SAILOR'S GRAVE)

How old were you and who influenced you to pick up a guitar?

I was about 12 and bought a red Encore bass guitar. I was crazy for Metallica, Sepultura, Guns N Roses etc. I bought my first electric 6 string in 94 and it was an Epiphone Les Paul. By then I was into Corrosion of Conformity, Slayer, Pantera. I grew up loving metal! I think I kind of slowly turned to Punk after hearing NOFX in about 1996, but I still listen to some metal. My last gig was Kylesa.

You joined the Hyperjax. What albums of theirs did you play on and why leave?

I played guitar on The Bottom Line. I guess we just fell out, myself and Sam. But we're all good now, so it doesn't really matter anymore! I'm gonna go and see them play next month.

How and when did A Sailor's Grave form?

ASG was started just for a bit of fun. Myself and Bob (Corner) wanted to play some music post-Hyperjax so we got Manning (Adjusters) and Wally (ex-Hyperjax) involved too and just jammed it. We never intended anyone to hear us, we just played for ourselves. After a couple of gigs we picked up some momentum and people seemed to offer us support slots all over the place, with some really great bands. We just went with it! After Wally left, Jay from Redneck Zombies picked up the sticks and appeared on the last two songs on our album.

Where and when was your first gig?

From rumours I have heard life on the road with you guys is one big party-----plenty of women and beer???

Ha ha! Well, maybe in the old days. I have a little boy and I am getting married next year, I met my wife a few years into ASG, so she definitely tamed me. But yeah, before that it was a bit wild. We still like a party, but its not every night now. And definitely no girls for me, although I don't think we had many groupies in the first place!

How did you get the deal with Crazy Love and are you happy with the first album?

I don't know how the deal came about. Bob just turned up at rehearsal one day and said "OK, we're signed to these guys now" and we all just said "Alright, cool"... And that was that! I am happy with the record to an extent. I think some tracks are a bit weaker than others, but like I said we had no intentions for people to like it or not; it was just for us. It was a learning curve, really. When Jay came in, the recording process changed and the two songs which he played drums on (London Song and Better Now) feel like they are closer to what I wanted to achieve musically. Whereas I don't think we'd ever do a track like 'Dead Men' again, but it just felt right at the time.

Have you played in Europe yet?

We have played in Wales and Scotland. That's abroad right? Nah, we're too busy and too lazy! If someone wants to book and pay for the whole thing then we'll do it. But that's probably not gonna happen! In fact, we had a tour booked in France, but didn't turn up. I think we were drunk. I can't remember, so that's a good guess.

What happened to Wally P. Parkinson ?

Good question. What did happen to him? Do you mean like was he involved in an accident to get those looks? No, he is still alive and well and Bob sees him often as he haunts the pubs of Wigan. We're all still friends.

Will there be a second album and what does the future hold for A Sailor's Grave ? Any gigs lined up?

Maybe. That's the answer, really. We haven't rehearsed for six months and we're just getting back together now to see if we can still play. I have a whole new album written, and its pretty eclectic. In that, I mean a lot of people who previously hated us will hate us even more for it! I guess we're just not scared of fitting into to a particular template or genre. The double bass thing gets us lumped in with all that silly-billy music. I honestly cannot stand 90% of it. I like the Grit and sometime listen to Living End. But mostly I am into punk rock. We're not claiming to be anything. We're just a band and we play the music we like to play. I don't see why people get so worked up about that!

How long have you been a tattooist, what the other guys do for a living?

I have been tattooing for about 6 years now. I pretty much apprenticed under Bob, who is also a tattooer. I honestly am not sure what the other two guys do for a living, but it doesn't seem like much!

How long has Blue Blood been up and running and who else works there?

Blue Blood has been running for 3 years now. We are currently in the process of moving to a new custom built studio, but its just opposite the old one, so you should all be able to find it ok. Polly tattoos there too, for the past 2 years. She does mostly realistic and portraiture. And Bailey has been tattooing for one year and tattoos new school and neo traditional.

What sort of tattoos do you like doing best?

I guess my style is quite traditional. I like doing pieces with a shitload of black in. I have been mixing up the Western trad stuff with Japanese and trying to forge a crossover style based on that too. I'm inspired by peers and contemparies such as Mike Adams, Steven Peters, Xam, Hexa, Juho. Those guys put on some seriously tight pieces and for me pretty much currently set the standard for the style I tattoo in.

Ever tattooed any one famous or any fellow band mates?

I have tattooed Manning and Jay from the band. Um, Bundie from the business? Although he is not famous really. He's just a tit! I guess we had some "well known" people in the studio, but I'm not really interested in that sort of thing.

What's the worst and best thing about being a tattooist?

The worst thing is never having any time. You get up, you go to work, tattoo all day, clean, come home, draw, sleep. That and the back pain. And the stress of new studios opening next door to you! The best ting is the freedom of creativity. I am very blessed to be in the position now where people tend to just give me a subject matter and let me run with it how I see fit. It's a big responsibility and I am incredibly lucky to work in this way. Although I must add that hard work got me into this position in the first place and tattooing is not a quick and easy way to make money. It consumes your life. Half the reason ASG has been so slow recently is because I am so busy with tattooing. We're doing Helsinki and Malmo conventions this year, so its a real drain, time wise!

I have been tattooed by Bob! Also, Phil Kyle; Daniel Morris did my back piece and left sleeve; Adrian Willard; Hexa; Polly; Bailey; Danny Rossiter; Gre Hale; I am getting work from Pedro Soos next week - he is tattooing my kneecap! And also some work from Becca later in the year. I'd love to get some done by Mike Adams one day. Also Juho in Finland.

Will you be a tattooist for life?

Well, hopefully. It consumes more of my time and thoughts currently than music. I hope so. As long as the passion exists then yes. As soon as I lose it I'll turn to something that excites and scares me again. Peace. 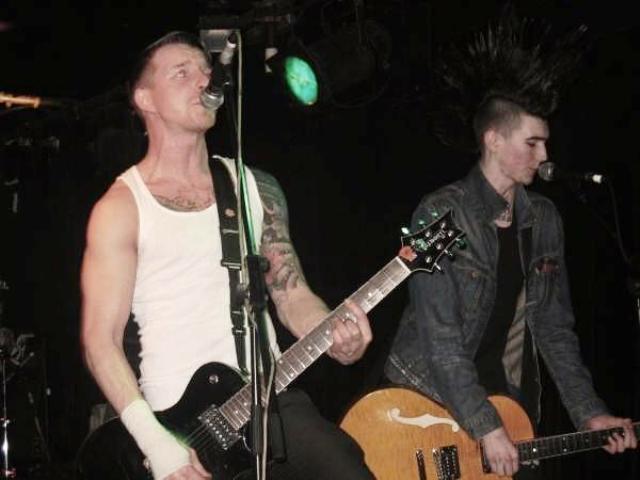 A SAILOR'S GRAVE ON MYSPACE