( DRUM BANGER OF THE METEORS, ESCALATORS, TALL BOYS AND MANY MORE  )

Hey Mark, when and why did you leave the United Kingdom to emigrate to France? What are you doing there these days?

I left at the end of 2001. For a long time I'd wanted to live in France and we got the chance to be able to do it, no regrets there. Here I run a business which looks after US artists touring in Europe - money matters like taxes. A lot of very big artists and also some very cool rocking clients. We go to Paris to see them play.

You became a member of the MySpace community some moons ago and started to post a very detailed Meteors-The Early Days story from your own point of view. What was your main motivation to do that after all these years?

I was reading the Joe Strummer biography which I really enjoyed. I knew a few of the people in the book and it brought back some happy memories. I decided that I'd start writing down the Meteors story for my own amusement. I was surprised how much I remembered, and how much fun it was. So I thought I'd post the first one as a blog on MySpace. The reaction was very positive and so I carried on. There have been 1600 "hits" so far.

I have no intention to forestall any of your next installments of The Meteors story, but I can´t do a Mark Robertson interview without talking about The Meteors. First I wanna know what do you think were the very early key tracks for the evolution of Psychobilly? When did you realise that The Meteors has created a new music genre?

I would say Voodoo Rhythm, My Daddy is a Vampire, Radioactive Kid and The Crazed. When did we realise that the Meteors had created a new genre ? I think by early 1981 we had the feeling that we were treading new ground. The crowd reaction was getting wilder and I suppose it was a bit like being at the beginning of punk.

What's the case with the Clapham South Escalators EP? I´ve always wondered why this wasn't an official Meteors release?

The tracks were recorded at the end of the mixing of "In Heaven" as we had half a day studio time left. The Meteors were signed to Island and they had the album and first single lined up so we had to release it on a different label under a different name. That's the reason we are "disguised" on the cover photo (not very well in the case of Nigel and me !).

Why and when did you leave The Meteors?

I was offered the drumming job in Theatre of Hate, who the Meteors had supported. They sacked their old drummer and after I'd auditioned and rehearsed with them for about two weeks they asked me to join and insisted that I called the Meteors there and then. After I'd done one gig they replaced me with someone else. Kirk Brandon was a bit strange and I wonder whether it was done to screw up the Meteors. This was in December 1981.

Do you have any idea what Nick Garrard (first Meteors manager) is doing these days?

I have it on good authority that he's alive and well. I've not been in touch for a long time but would like to speak to him.

You rejoined Nigel Lewis in The Escalators sometime in 1982. The output was the very excellent Moving Staircases album and a couple of single releases. Is it true that Munsters Theme is an original Meteors recording?

Not at all. It's the Escalators - Nigel and Woodie on guitars, Bart on bass and me on drums. Again we had some time left at the end of a recording session and put it down in one take because Nick was looking for tracks for an instrumental compilation. At the end of the track you can hear Nigel say "that'll do" which shows we weren't taking it too seriously. It was one of the best selling singles on Big Beat. The drumbeat was the first time I'd tried to play the snare and cymbal with the same rhythm for a whole song.

The addition of Woodie also brought a second drum kit on some of The Escalators recordings. Who came up with the idea of adding a second drum kit? Is it difficult to work with two drum kits?

Woodie was playing rhythm guitar and there wasn't much for him to do because the lead guitar and bass were very powerful. So as I knew he was a great drummer I suggested we might use two kits on some songs. We are a bit after the tribal sound that Killing Joke had. We've got different drum styles, Woodie is very precise and I just hit them. So the styles complemented each other, we got the hang of playing together quite quickly and the two kits never really caused any problems.

After a couple of line-up changes and Nigel-after he get rid of his pain killers- unpleased with the Escalators sound, the band finally metamorphosed into The Tall Boys. The band had a very spectacular appearance with the track Ride This Torpedo on a TV special that was filmed for the UK music show The Tube. How did that happen? Do you have any reminder of the performance?

Nick Garrard put the show together, he was managing the Tall Boys, Milkshakes and maybe the Prisoners as well. Unfortunately it all happened whilst our bassist Kevin was on holiday in the US so we had to do it without him. We pre-recorded the tracks so just had to mime in a pub full of our mates. Drank a lot of beer, danced a lot and ended up pulling (I think !).

The Tall Boys also managed it to appear in the soundtrack of the horror flick Return Of The Living Dead. What´s the story behind Take A Walk?

Our record label told Nick they were looking for songs so he sent Nigel and me to the pub to write it. We wrote the lyrics on a beer mat in about 20 minutes. The drum intro and rhythm in the verse is from some background music in the movie "In the Heat of the Night", I'd watched it a couple of nights before we recorded the track.

You also played drums in various other bands like the Johnson Family, Queen B's, Deadbeats just to name a few. Which era did you enjoy the most?

Difficult question because I enjoyed them all in different ways. I played in the Deadbeats and Tall Boys at the same time so that was fun. Both bands did two week tours in France and playing every night in a different French city was probably the best. I also got to eat some great French food and drink some good wine.

Yes - the last one was 2 weeks ago in the Latin Quarter of Paris. With extra chili sauce. 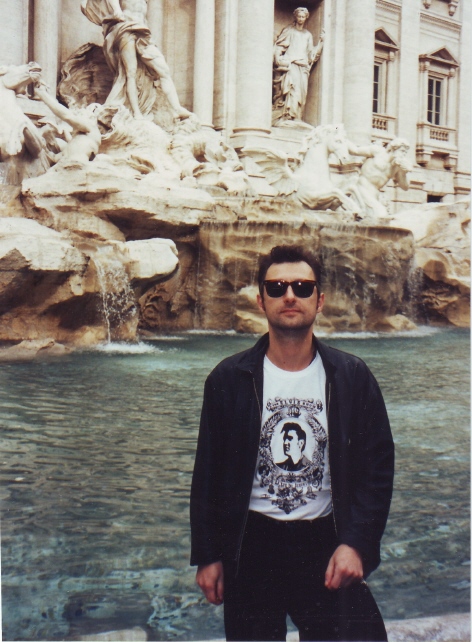