Firstly, how did you come to get your nickname "Mad Dog" Cole?

I'm not really sure how it came about. I think it originally became a "Self-Title" when Tony M and myself first started writing together. As we started recording the 1st album, my singing kinda just came out that way...........Or was it because I was just MAD, and smelt like a Dog?? Can't remember now.

There were a loads of gossip and rumours about Mark Cole for about two decades. What have you done, since you left Krewmen in late 1987?

When I left the band, I moved to Perth, Western Australia. I came back a year later having got real bored with the slow pace of life.
Don't get me wrong, I loved the place. It's just I'd been used to years of high speed living, and felt trapped by the laid-back nature of the place. I'd go back tomorrow for a holiday or work, it's just not the sort of lifestyle I could live.

Have you tracked the Psychobilly movement over the last years? What do you think about the current scene?

I can honestly say I listen to pretty much nothing else! The scene to me has progressed in a positive direction. We were always trying to
find a new, fresh angle in everything we did, and there are still many good bands out there doing just that. I was STUNNED that anybody had even heard of me, let alone remember me & swamp me with emails and messages!!
We must have done something right...........

Krewmen was some sort of authentic Rockabilly outfit at the very beginning. All of a sudden, the band psycho´d up. Do you remember how do you get ahead with Krewmen? What was your inspiration to join the band?

I first met Tony Mcmillan through a mutual friend. We seemed to hit it off immediately. Tony was the creator of the Rockabilly trio, and I knew him only as a "local" band member. He was looking to move forward, but in a different direction.
I was a Psychobilly-Or-Nothing kinda guy, so he decided to take me on and see what happend. We began writing the first album within a few days.

The band released a trio of quality albums in less then two years. What is your favourite one and why?

My personal favourite is probably the Sweet Dreams album. It had everything I wanted to hear from a Psycho band at that time. It was Heavy, Hard-hitting, and 3000 MPH! It was also good from a crowd point of view, because it meant we could get many more songs into a live set, simply because of the speed.

I will never forget the day when I saw Krewmen --featuring Mark Cole-- for the first time in my life--,supporting The Pharaohs. The audience were swept off their feet. What was your most memorable gig?

I have been dreading this question!!
We did so many gigs, I honestly can't name a favourite. Tony and myself were constantly looking for new aspects, so alot of the inspiration
came from where we had played, people we had met etc. If I had to choose, I would probably say our very 1st gig in Reading, UK.
I had sung on stage before that night, but had never been part of the main focal point before!
IT BLEW ME AWAY.........

You´re probably the best Psychobilly vocalist of your time. Do you agree with that? I always wondered if you ever have attended a special vocal training or something like that?

I would never comment on a statement like that. I just did what I did, the best I could at the time, but it had to be enjoyable for us AND the fans, otherwise, whats the point? I have never had voice-coaching, but I would have thought that was obvious by the way that I sung....

I always got the impression that the Krewmen were more popular on the European mainland than in the UK. What´s your opinion about it?

My own thinking on this point is that the UK had many Psycho bands around at that time, but the rest of Europe was only just moving towards the genre. When we first appeared abroad, the crowd reaction to us was as though we were Satanists! Whilst this made good headlines in the music press, I don't think Europe was quite ready for us at that time.

Let´s talk about the time before you eventually joined the Krewmen. How did you first become interested in the Neorockabilly / Psychobilly thing?

I came into the scene in about 1980, but went kinda mental after seeing the Guana somethings....(Sorry Pip!)
It had everything I was after. It was new, innovative, and probably most important for me, it felt like I had finally found what I had been
searching for.

The split? What happened? Why did you leave Krewmen?

I thought this would surface! At that particular time in my life, I was having alot of problems in my personal life, most of it women-related.
It happens to us all sure, but it stopped me focusing on what was truly important,....the survival of the band. There has been so much said about it over the years by the Internet community, but only the band truly knows what was going on at that time. I had to make a decision, and unfortunately, it appears I made the wrong choice.

How are you and Tony McMillan getting along these days?

Tony and myself get along just fine. There has been years of no contact between us, but that was mainly due to both our personal
circumstances. I've lived in a few different places, Tony has had other commitments. Not crap, just the truth.

What about the Krewmen-reunion rumours? Are there any concrete plans for future releases and/or future gigs?

I am hopeful that we will be working together again in the very near future. We both have ideas that need working on, we also now live some distance apart, but I'm sure something excellent will come from it. 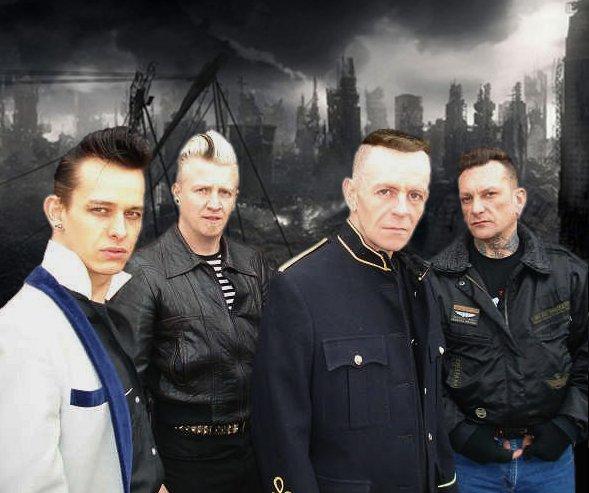