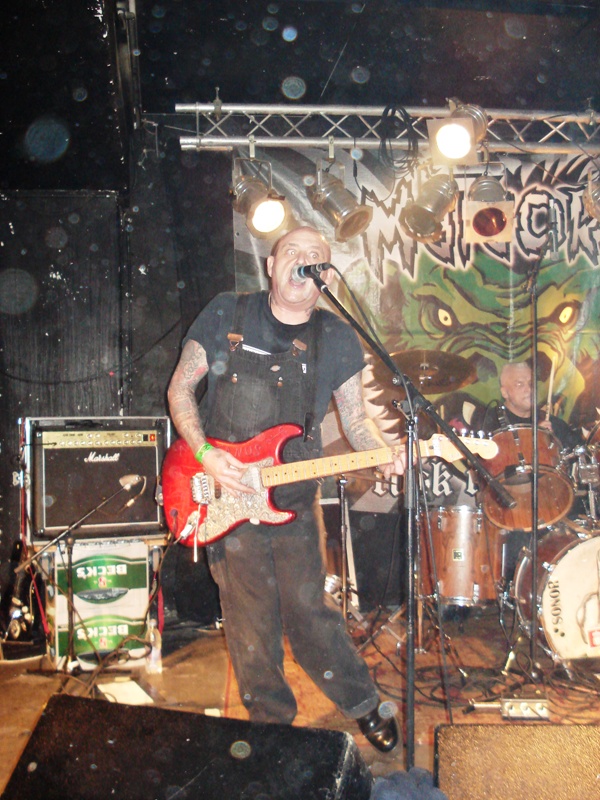 When Terry Earl and Pat Panioty walked away from Raw Deal by spring 1980, P. Paul Fenech (v/g) and Nigel Lewis (v/b) eventually found themselves with a new drummer called Mark Robertson, who had been with few low-profile Punk bands prior to his enlistment to the band and it was also decided to change the band name to THE M3T3ORS.

During that transition they laid down three tracks for the 'Home Grown Rockabilly' compilation on the Alligator label even before the first ever gig eventually was to be held on 25th July 1980. Both Nigel Lewis and P Paul Fenech weren't interested in running things by the Rockabilly book any longer and so the "Boppin' with my baby "- style lyrics had to go and were replaced by their own interests in the likes of B movie horror, science fiction and related stuff. The number of originals also increased and the straight Rockabilly sound has also been changing with some other musical influences thrown into the mix. The band sounded like no other band on the rockin' circuit at the time and a new genre was about to be born, generally known as Psychobilly. Most of the Rockabilly revivalists turned their back on the band, but soon THE M3T3ORS have been gathering a new, ever-expanding loyal following known as the 'Crazies' or the 'Zorchmen' in the early days.

In March 1981 "Meteor Madness", a 4-track EP, was released. It was the soundtrack to a short movie that was shot to support the two-tone Ska movie Dance Craze in the cinemas, followed by the cult AA-single Graveyard Stomp / Radioactive Kid. The three-piece also nailed some demos for EMI Records, but this deal didn't occur to happen. Those tracks were to be unearthed later and released as 'The Lost Album' in 2004. In August THE M3T3ORS were signed to Island Records and recorded their debut album 'In Heaven', definitely the first long-playing record in Psychobilly history and a classic of its own. This album was supported by the single outtake ' The Crazed / Attack Of The Zorchmen'.

Mark Robertson walked away by end of 1981, soon to be followed by manager Nick Garrard and Nigel Lewis, who eventually continued his musical career with the Escalators, Tall Boys, Johnson Family and more recently Nigel Lewis & The Zorchmen. P Paul Fenech couldn't be stopped on his mission to create more pure Psychobilly anyway. The second LP Wreckin' Crew topped the UK Independent Chart in 1983 and became an instant classic of the genre. During the remaining years of the 1980's he and a variation of M3T3ORS line-ups created at least one classic album each year, frequently supported by EPs and single releases. Band members during the 80's  included best-known drummers Woodie Taylor, 'Ginger' Meadham and Toby 'Jug' Griffin to name but a few and first-class bass players like Mick White, Rick Ross, Neville 'The Spectre' Hunt and Lee 'Red' Brown amongst others.

The 1990s saw THE M3T3ORS releasing more classic material in the likes of Mad Man Roll, Demonopoly, No Surrender, Bastard Sons Of A Rock'n'Roll Devil and The John Peel Sessions (1983-1985) that hosted tracks recorded for the Indie guru back in the days, with each album cementing their reputation to be the undisputed Kings of Psychobilly.

They have made no less than 30 official albums, countless singles, not to mention dozens of compilations and re-issues. Frontman P. Paul Fenech has also released more than a handful of solo albums and worked on several side projects, most notably The Surfin' Dead and The Legendary Raw Deal respectively and it's an open secret that he has also been involved in song-writing for motion pictures and TV commercials.

The current M3T3ORS line-up looks pretty healthy with Wolfgang Hordemann treating the drum kit since 1993 and Simon Linden who took over the double bass in 2006 and it's safe to say that the creators of pure Psychobilly are as busy- both in the studios and live on tour- as ever. Always supported by their loyal following, known as the World Wide Wrecking Crew, THE M3T3ORS released a DVD box entitled Pure Evil Live to celebrate their 30th anniversary in fall 2011 and an instant classic with their latest album Doing The Lord's Work in 2012.