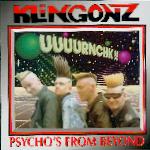 After deciding to invade planet Earth , the KLINGONZ debuted with their Psycho's From Beyond on Fury Records back in early 1988. The four piece outfit laid down a twelve-track album, that definitely comes from the speed freaks edge of the Psychobilly spectrum and is highly regarded as one of the key releases that heralded the new "Punkabilly" era. The album was re-released on Crazy Love Records in 2003 including 8  live tracks, that were originally recorded at the Big Rumble in 1990. Among the highlights are a Billy Lee Riley cover of Flying Saucers Rock & Roll, Oompa Loompa, Too Sentimental and the not so delicious Pick Pick Yum Yum.

With a successful debut album under their belt and stirring up the Euro scene with their loony live shows in the late 80s, Fury Records didn't wait long to release a follow-up. Blurb showcases the KLINGZ on top of their game with high-speed Rock'n'Roll, healthy Punk influences, stunning cover versions including a spaced out delivering of the Sesame Street theme and catchy originals, many of those have become fan favourites since then. Highlights are Werewolf Boogie, Psycho Mansion, Sesame Street, Madness Is a State Of Mind and How Long Do You Wanna Live?.