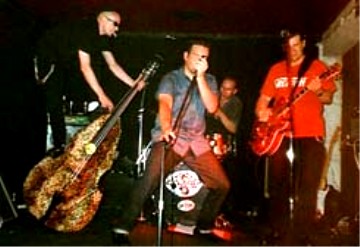 King Voodoo is a 4 piece Rockabilly band from Scottland. They were formed in 2000 by the Cob twins Eddie Gene (v) and Scotty Lee (g). They added Big D (b) and Rod Vegas (d).

Influenced by the Stray Cats, Horton Heat and the early Meteors, King Voodoo has already  found its own style of  Rockabilly, describing themselves as " The rockinest Creeper wearin' catz in the galaxy". Though the term "Psychobilly" not completely  fits, their kind of Rockabilly, mixed with voodoo power, got the old school intensity of the better Psychobilly acts.

In December 2001 they recorded their debut album for Crazy Love Records.