Hi Kevin. Firstly, tell us a bit about yourself. How are you? What are you doing these days?

Right. well I'm getting old, although my mind is still very, very young!!!, and I own a marketing company and last year I worked with and promoted a couple of gigs including the Stranglers and Squeeze in the south of France! Apart from that I'm the same as I was in the eighties/nineties and the naughties!.

Among your duties with Torment, you also worked as a sleeve designer for Nervous Records back in the eighties. How did it happen?

Well I needed to get the torment album covers produced and couldn't think (trust) of anybody else to design them, so set about creating my own designs. Then a number of bands asked me to design sleeves for their albums and there you go, I became a album sleeve designer!

Which of the sleeve designs that you have made, do you like best?

None of them! but I did really like (love) 'psyclops carnival' because you saw the real torment in that photo.

When and how did you get into Neorockabilly/Psychobilly ?

I was round a mates house (Nutty Dave - our original manager/roadie) and he knew Steve (Whitehouse) from Frenzy and said listen to this (Robot Riot)....well I was hooked from that moment on...not really on Frenzy but on the speed and energy that psychobilly represented as a genre...and I remember saying to Dave....I must start a band!

Do you remember your first meeting with Simon Brand ? What was the main inspiration to form Torment?

Yep, we went to the same rockin' night in Bristol and Nutty Dave introduced me to Si and I marked out my intention of starting the next big psycho band! We laughed, drank a lot and decided to meet up to forge a plan to start something - we really didn't know that would turn into Torment!

One of the band´s earliest output was Uncle Sam, a track which was co-written by Simon Brand and yourself. The song was always an inherent part of the Torment set and also became some sort of a genre classic. Is there a special story about the creation of Uncle Sam?

Not really, We were in the studio and I sort of started bashing out a marching beat and Simon strang along! the words came along in about two minutes, I could say it was about US invasions and stuff but it was really just a piss take song!

Torment has never fit into the usual Psychobilly cliché. The band avoided horror movie themes and arranged the traditional line-up of guitar, double bass and drums for a very unique, distinctive sound. What´s the secret of this very special sound? What did make Torment so very unique?

We (Si) loved the heavy Punky guitar sound mixed with 50's authentic clinical guitars, I loved Cozy Powell as a drummer and he was always playing the heavier sound (dance with the devil) on Toms etc, so the sound just evolved I guess! The double bass never really came into our sound (live) until Vince (Mildren) came into the band, but the recorded sound of the double bass is very easy to generate/enhance in the studio! What made Torment great was the people, our producers, the fans and the commitment from Roy (Williams)at Nervous. You would not believe the letters we got from all over the world, we tried and hopefully replied to each and every one but the people who supported us made Torment what it was and still is!.

The band regularly appeared at London´s Klub Foot and at the big festvals in Belgium, Holland etc. What was the most memorable gig?

I would have to say our fist headlining gig, I think it was Wigsville Spliffs, Coffin Nails, Long Tall Texans and us. We rocked that night! Oh and our first Klub foot outing, Torment, Demented, Frenzy and Restless, and our last track of our set that night was Cry or Die....and you should have seen Steve's (Whitehouse's) face!...but maybe it was the recording of Stomping at the Klubfoot there are so many to think of, and I remember them all!

The band was also one of the most creative and prolific bands of the second half of the eighties, releasing four full-length albums and a four track EP in less than five years. What´s your favourite Torment platter and why?

I really enjoyed working with Steve Whitehouse on 'Three's a Crowd, we had a great laugh in a great studio and musically it is spot on, tight and very professional, and Si and Steve got on very well that week!, he brought the best out of Torment, and we all really loved that album.

You ´ve talked about a recorded song that was never released in an old interview for the Zorch Attack fanzine some 15 years ago. What is the 13th track of the Psyclops Carnival album?

Bloody hell 15 years ago!!! now there's a question. well I think it was a song from our original demo tape (Clive do you have a copy of it? Help me out please!), sorry, will have to get back to you on that one...but I'm sure it was bloody great track!

Around 1993 Simon Brand left the UK and relocated - after a short stopover in Amsterdam- to Vermont (USA), which also forced the band to take a rest. What were his reasons to leave England? Did you make any plans to continue with Torment at a later date?

I don't want to say too much as its all been said before many times but Yes, we had plans, very much so, I was in contact while Simon was in the states, and we had loads of plans.

Simon Brand had the reputation of being difficult at least. Which traits of Simon did you like / dislike the most?

In retrospect do you think there was any chance to stop Simon from committing suicide?

Not really, as Roy Williams said "Simon is a very creative person"! He was on the edge, but that was what made Si so great!.

This is really my last questions. Were there any serious thoughts about continuing Torment after Simon´s death?

No, how can you replace Simon Brand! Really! Torment were three people they were our songs, and our fans and our times. Best remember torment as a fun, unique, strange, creative and lovable outfit, That I remember my band. 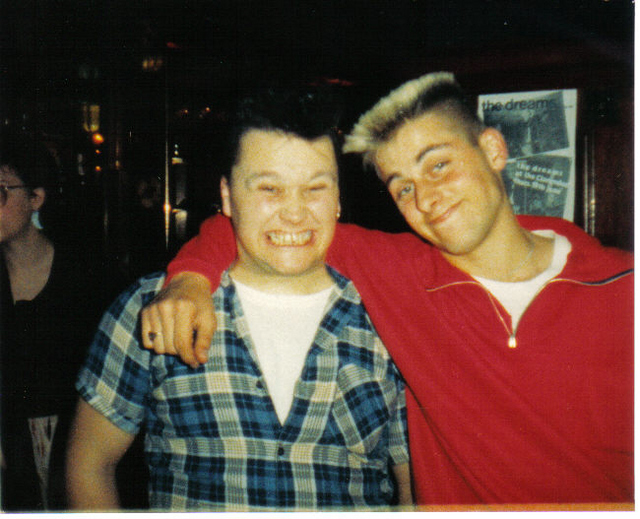