First of all, tell us about Popeye´s Dik. How has the whole thing started and where did that  name come from?

Popeye's Dik started many moons ago in 1990 after too much Jack Daniels and cocaine....

Do you remember the first rehearsal and your first gig? I guess it was a lot of fun back then?

The first gig was at a local pub full of people expecting some sort of Elvis tribute -I think they were a bit shocked -that was 1990.

The lineup from The Fix From The Fez album looks like an all-star ensemble of Psychobilly. It includes Steve Whitehouse, Steve Eaton, Ben Turner and Alan Wilson. Was it difficult to recruit these prominent guys for a joint venture? Why have they all uses pseudonyms on the record sleeve?

The all star line up came about because the studio time was booked, but I didn´t really have a band. So I told Alan Wilson and he said don´t worry about. I will sort it out. Alan, Steve Whitehouse , Steve Eaton and Ben Turner are all under different names because at the time Whitehouse was having contract troubles with another label. So once he said he wanted to go under a different name and everyone else did too ,but not on the inside cover.

What's the inspiration for you to create and record songs like King Sperm or 20.000 Women? Is it true that you frequently receive  letters of protest from angry women?

I don´t get any complaints about King Sperm etc. I think most women who hear it, know its only fun.

One of my favourite songs from the Popeye´s Dik is Who´s The Daddy. Is there any personal story about this song?

Who´s The Daddy is just based on the film Scum with Ray Winston in. Have you seen it?

I can´t remember the film for the moment. But I´ve also have taken notice that you have been involved as co-writer for Deathrow Database fanzine some ten years ago. Can you tell us about this job?

I was never really a co-editor for Deathrow magazine I really liked the mag and just used to send them some stuff....It´s a pity it stopped, but Alan Wilson is really busy these days.

In one of its issues you´ve listed your Top 5 tracks and albums with King Kurt's Destination Zululand and Ooh Wallahwallah leading your chart. Anything changed? What are your favourite tracks and albums today?

Yeah those are pretty much my fave tracks to listen. Lately I have been listening the Demented Are Go CD and the Demented Scumcats one plus Thee Exit Wounds CD is great, but I still listen to King Kurt, Sharks, Johnny Cash, Punk- you know the usual.

Speaking of King Kurt. Tell us the tale about the TV show "Stars In Your Eyes" .

Oh god the Stars In Your Eyes thing was this shit show on tele over here-Have you ever seen it?-Anyway, years and years ago me and some mates went to one of the rehearsals. I was going to sing She´s As Hairy by King Kurt and my mate Mike Allen -the original bass player in Popeye´s Dik- was going to be P. Paul Fenech. But they were so stuck up by themselves , moaning they had never heard of Smeggy etc so we just got drunk and told them to f*** off.

This is really my final question. Are there any precise plans like new recordings or gigs for the future. What can we expect from John McVicker and Popeye´s Dik?

The future-well who knows. Some guy I work with is on about us doing a couple of tracks for some compilation CD later this year. As for recording I would like to see the song Searchin' For The King come out as a CD single in August 2007 to mark 30 years since Elvis left the building-a nice touch don´t you think?

Gigs? Nothing at the moment, but there has been a few people asking for next. I would like to do another CD --who knows when -never say never-could be  2010 to mark 20 years of Popeye´s Dik. What a thought- just watch this space, but generally I live quietly in North Wales with girlfriend and son. 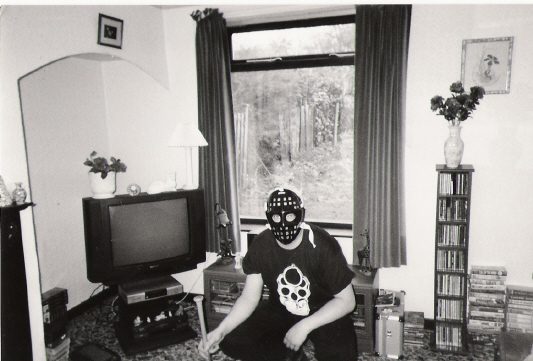