Hello Jeroen. The Batmobile story is well known to us as it is included on the official Batmobile homepage and it was also part of several interviews, but I´ve never read something about the band name. Is there a special story about it and who did choose the band name?

If I remember correctly Johnny was the one to suggest the name Batmobile. It's not a special story but I remember him coming to a band rehearsal bringing an ancient model of the Batmobile and suggesting to name the band after the car. We all were kinda fond of the old fat Batman in tights and we turned out pretty much the same so I guess it was a fitting name after all.

With the releases of mini LP Batmobile and the first full length album Bambooland Batmobile became the most popular and most noticed Psychobilly outfit from the continent. Any explanation for that?

When you are 19 like me, living in a province town and you have recorded an album you don't expect people start to call you from all over the world, so at least you can say we were a bit surprised. One never knows why an album does well or not, it's always guessing. But I think that we sounded differently compared to existing bands. I'm not a music professor but people always tell us we have our own sound, are a great live band and that we always try to experiment with sounds on our albums, something most other bands are too scared to do.

The increasing popularity finally resulted in a gig at the mecca of Psychobilly- The Klub Foot. Can you remember the first offer to play there. How many times did you gig there and do you have any special reminder of the venue?

I don't remember the first offer....I didn't handle business back then. I do remember our first show there, early 1986. We played with Demented and Torment if I'm correct and the place was a bomb. I didn't realise that this place was that special at that time, for me it was just a cool club with a big audience. I do remember some faces, snakebites and funtimes from it and I do remember the recording of that KlubFoot album/vid.....it was soooo damn hot we almost died on stage and also the bass player from Rochee didn't show up and Eric had to fill in for him...fun times.

Talking of Torment. I remember that Batmobile and Torment often gigged at the same festivals (Belgium, Hamburg).As you might know I´m very interested in everything surrounding Simon Brand and Torment. Do you have any special reminder of Simon Brand or the Torment?

First time I met the guy was in the Klubfoot and he played his gig with 5 strings because he forgot to pack a spare set of strings......I thought that was pretty pathetic. The times we met after that were cool.....nice people not my fave band though.

Batmobile has released no less than ten albums in a period from 1985 until 1996. Can you name your favourite three Batmobile albums and tell us why!

Hard one......but here goes. Dynamite because I like the sound of that one best and I really think the dynamite-concept-album was just a great idea......(if I say so myself).

Besides that one lately I have been listening to Amazons a few times and I think that the combination of different compositions and weird rockabilly sound works very well too. Third album I'm fond of has to be the first because it started it all......although it's musically by far our best in my opinion......or better Planet Cheese because I love the fact that not one song sounds the same on it.

The band is also responsible for loads of Psychobilly anthems and fan favourites- Transsylvanian Express, Frenzy, Cold Sweat, Magic Word Called Love, Ice Rock to name a few- How many time do you spend to write a song? Are there any Batmobile songs you don ´t like anymore?

Some songs take 2 minutes to write and some take 2 days to write. 'Inspiration' comes at the weirdest times, in bed, on the toilet or in the shower.
About the songs, there are no songs I hate, I think that every song has it's own story. But there are songs that do well live and songs that don't.

Batmobile came back from retirement in 2003. What were the main reasons to gig again?

After being away for 2 years Lonesome from Mental Hell asked us to do one show for him in Speyer 2003. Because we go back a long time we agreed on doing that. Having done that show we realised how much we missed doing that. Also we were in better circumstances (personally, work and family wise) to make some time for playing again.....it just was time again.

I know that you have always been very reluctant to talk about other bands of the Neorockabilly /Psychobilly genre, but  can you make a short list of bands or albums-regarding Psychobilly / Neorockabilly- that have really impressed you- one way or the other?

Batmobile has never suffered -like most of the other bands ( I can´t come even up with another band at the moment)- from line up changes. I guess it´s really difficult to retain a line up together for more than twenty years?

For us it isn't difficult. Being family and best friends it's only normal to stick together. I can't imagine Batmobile without any of us 3, I think you would have a different band if you replace one of us.

Your latest side project is called Triple Dynamite, which is some sort of pure Elvis Presley Tribute. Please tell us a little  about it.

Being a huge Elvis fan since I was 9 I always wanted to make an album with my favourite Elvis songs......not that the man wrote his own music but by singing the songs he made them his own. I tried out several guys to get an Elvis band together since 15 years ago but last year I finally ran into the right guys. With bassplayer Mars (69 Beavershot) and drummer Marc we rehearsed 3 times and the result was great. We even convinced the people at Count Orlok so they are coming out of retirement as well. We will release our very own version of 13 great songs.....it won't be an Elvis imitation contest and we don't sound like the man at all, but it's f***ing great. The album title is 'Elvis in Wonderland' and will be out next month.

The latest Batmobile releases were a cover version of Warren Smith´s Ubangi Stomp on " Go Cat Go! A Tribute To Stray Cats " and the track Deep Down on A Tribute To Batmobile part 2. How did it happen? Was there a special reason for choosing Ubangi Stomp?

We were asked by a friend to work along with that project. First we opted for I won't stand in your way, but it was already taken (although it did't got released after all) so we looked for a song that fitted us. Being the Bamboobillies of the scene the Ubangi Stomp is very fitting and it's also a tribute to a great artist Warren Smith.

With nobody out there interested in reading this interview, you can really disclose your plans with the band. What about the long awaited new album?

We have secret plans to release a live DVD with material we have lying around and also a live box with of about 100 shows we recorded since the start of Batmo........but no plans for a new studio album at this time. 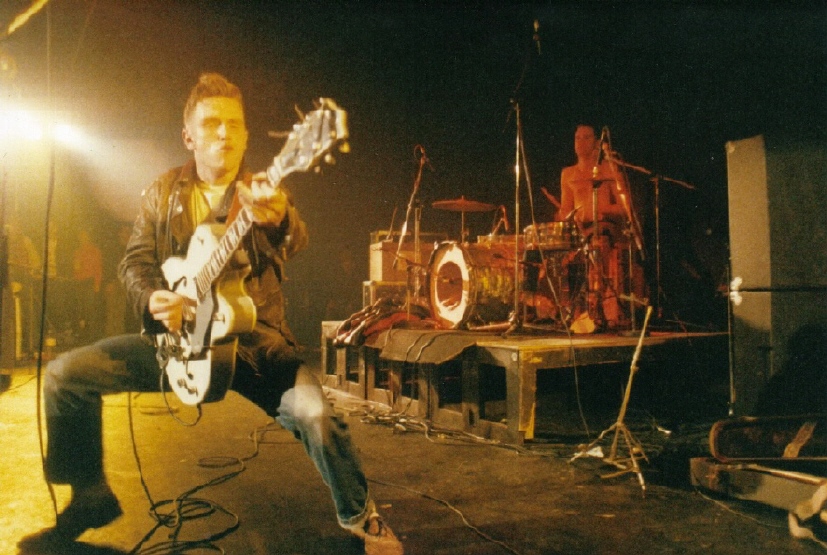