When did you play a double bass for the first time?

This must have been somewhere in 1983. I was into rockabilly and psychobilly already for some time and decided I would also like to play in a band. I cannot sing, so had to pick an instrument. Double bass just appealed to me, so one day I just bought one and started learning to play. Ritchie (later Blue Moon Special's guitar player / singer) was living nearby and he wrote down the basics (strings, scheme's, etc) and I just started practising. Once I could play the basic stuff I started playing to records. There's one album that I used a lot for that and that was the Delta's Boogie Disease (or Heart Attack, depending whether you would have the Nervous or Rockhouse release). I fairly soon started playing in a band. Our first band was called the Belvederes and we played rockabilly. I still remember we played a gig near the German border and there was one guy in the audience with a huge quiff. His name was Manni and he was shouting "psychobilly" during our gig all the time. I still have the tape somewhere, this must have been somewhere early 1984. One year later he wrote me a letter and invited me to visit a gig in Muenster. His band was called "Sunny Domestos & The Karlsquellkids" (that's how he wrote it) and they would playing their first ever gig with P.O.X. and the Tranquillizers. I told him I would be there (but he didn't know I played in the Tranquillizers, lol)

Difficult to answer and of course I will not stick to just one player. I have always liked Steve's playing a lot (Steve Whitehouse). Also Paul Diffin (I've seen him stage diving into the audience with his bass when he was playing with Sugar Ray Ford & His Hot Shots and continued playing lying on the floor and this really impressed me. Also I would like to mention Anders Janes. I'm not so much looking for how musically perfect someone plays, because I cannot even judge that at all. I was a lousy player myself, so how could I judge others? I look at musical skills, technical skills, stage presence.

How did you get into the Neorockabilly / Psychobilly thing?

I was into rockabilly/rock 'n' roll already and had seen local rockabilly bands, but also the Stray Cats and Shakin' Stevens in 1980 / 1981.For me it started during 1982. On 2 March 1982 I saw two bands that knocked me off my feet. It was during the Rockhouse Rock 'n' Roll Meeting and the bands were Restless and the Deltas. They were called rockabilly, but they had a completely different sound and energy then what I was used to from local bands and the original 50's sound. Also somewhere in 1982 a friend had me listen to two records that also had a huge impact on me, because this was completely new to what I was used to, yet still it sounded very familiar, because the records still had a lot of rockabilly components to it. These two records were "In Heaven" and "Made In The Shade". This is where it all started and the rest would follow very soon incl. all the famous Belgian and Dutch festivals. I have never been to the Klub Foot, but I can only guess that the energy and atmosphere at all those early festival all were similar.

What are the main differences between the Dutch scene in the early 80s and now?

Back then the music was new and attracted a new audience. I had to get used to that. I didn't take long before I was fully integrated into the scene, but in the beginning we would find ourselves fighting psychobillies at Polecats and Blue Cats gigs, because we weren't used to wrecking (yet). The Teddy Boy scene in Holland and the neo-rockabilly / psychobily scene didn't mix too well either, hence the start of the Rockhouse Psychobilly Festivals. Nowadays the scene is an accepted scene and an integrated one. It's not as black and white as it used to be and you will see psychobillies at rockabilly festivals and vice versa. Also, other musical styles co-exist nowadays. To me the perfect example is the Speedfreaks Ball.

Furthermore, the scene has become very international. Airfares have dropped significantly over the years and it's very easy to catch a plane and go somewhere. The Internet has also made this world a lot "smaller". You know about gigs going on all over the world and are in touch with people from all over the world, so the combination of relatively cheap traveling and the Internet has changed this scene from a local oriented to an international oriented scene.

The Tranquillizers became one of the first Psychobilly outfits outside of the UK and released an excellent four track EP back in early1985. When and how was the band formed? Tell us a little bit more about The Tranquillizers.

During '84 Martin (Paranoid Eddie in the Tranquillizers) a friend from Cologne, Germany came over to Holland and we did some playing on the Scheveningen Boulevard in public. During that same year I went to Cologne and played over there together with Martin and drummer Michael at some sort of a school happening. Martin and Michael already had the idea for a song called "Paranoia" and had been trying to form a band, but it didn't quite work out. We then thought we would have a try with a friend of my who had just started to play drums, Hans. I think we had only practiced two times when Klaas Westerbeek (we had already been knowing him for a couple of years) asked us if we would like to record a record. He would pay for it and would also provide free beer. What more would you want? Sometime during the autumn of 1984 we  went to the recording studio. The  night before going to the studio we thought about the songs we  were going to record, because we hardly had a repertoire having only played two times before . During a drinking session we worked out "Paranoia" and "Destroyed Illusions", and decided on the other songs we  would record: "Long Blond Hair" and "Born To Love One Woman". I  suggested the name for  the band - Tranquillizers and next day we went to the studio.

Are there any more unreleased Tranquillizers´ (demo) recordings in the vaults?

Nope......Those four songs were the only songs that we recorded. I guess there are plenty of alternate takes available, because we have played those four songs a loooooot of times during that one day we were in the studio.

Two songs of the EP (Paranoia / Destroyed Illusions ) also appeared on the first Psycho Attack Over Europe compilation album. How did it happen? Did you ever received a pay cheque?

I have no idea how they ended up on Psycho Attack Over Europe. Long Blond Hair also ended up Neo-Rockabilly Story vol. 2. Since Klaas had the master recordings and had also worked with Rockhouse he's the one that arranged all this. We have never received a pay cheque and I don't really care about this. I'm glad we were offered the opportunity to record the record and don't feel like going into discussions about who owns the right to whatever song and what has or has not been said about how many gigs we were supposed to play. We quit fairly soon, the main reason being that it's not possible to come together every week to practice.

The Tranquillizers split in 1985 and you eventually ended up in a Rockabilly band called Rocky Road. Tell us about your time with Rocky Road.

Actually, both Hans and I started playing with Rocky Road. Rocky Road had just split when Spider (Cees Dekker) asked if we would like to play with him. Rocky Road is one of those bands that had been around forever, at least, that was my feeling, because I had already seen them playing support the Rockin' Shades once. Since we lived relatively close together and had a place where we could weekly practice we decided we would give it a try. We started practising the standard rockabilly stuff (own Rocky Road songs, as well as classics such as That Don't Move Me, How Low Can You Feel, Slippin' In, Sittin' On Top Of The World, etc), but soon found ourselves playing some heavier stuff as well (Long Black Shiny Car, Love Me, Crazy Dream). We would start our gigs with rockabilly songs and slowly built it up to end with the heavier stuff. We had a great time and my liver still hurts when I think about those days.

Tell us about your vinyl collection. What are your favourite items?

I have been collecting records on and off over the years, both fifties stuff and "modern" stuff. Lately I'm not too interested in vinyl anymore. The urge to have every record that was ever released has vanished. Nevertheless, I still have some nice records. The thing with records is that you are actually holding something in your hands. The shiny vinyl, the sleeves, the great sound as well. It will never beat CD's and/or MP3's, but it's just more practical to listen to CD's or just stick the stuff on your computer and have access to thousands of hours of music. I'm very fond of my Eddie Cochran EP's, I also have records such as the Restless' Ghost Town on Sunrock, the early Blue Cat Trio records on Red Hot, the Blue Cats on Rundell (I still remember going with Klaas to Germany to pick up two boxes with those records and smuggle them across the German border). I think I have a lot of the stuff that was released during the 80's including Meteors, Vibes, Sting-Rays, etc. There's one thing I really regret and that's that I gave away a signed copy of Frenzy on Cat Machine, autographed by Steve, Merv and Si, because I thought I had another one somewhere and I didn't. Anyway, too many favourite items, because all vinyl is great.

If you were on death row, which five albums would you take with you?

This is the modern age. If I where on death row I would need electricity to play those albums. Instead of a record player I would then go for a computer and stick five 200 Gb hard disks in them. This would provide me with enough MP3's to actually enjoy staying on death row for a loooong time. It's just too difficult to name five albums, because to many great records have been made, not just in the past (Restless, Sharks, Batmobile, Sting Rays, Meteors, Vibes, Guana Batz, etc), but also today like Mad Marge & The Stonecutters, Triple Dynamite, Lunatics, Evil Devil & Hyperjax etc.

What was the last gig you´ve visited?

Last gig I visited was the Restless farewell gig at the Cruise Inn on 30 December 2006. I also would like to mention one gig that to me was the best gig in 2006 and this was Nigel Lewis backed by the Coffin Nails at the Speedfreaks. Just incredible!! 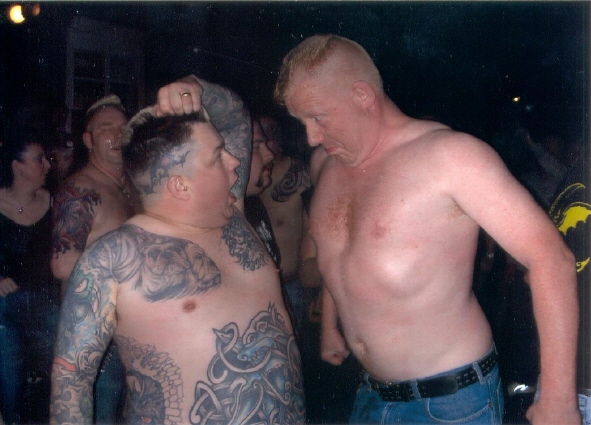