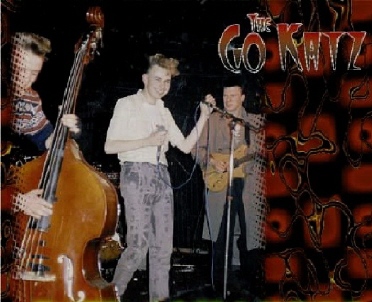 The Go-Katz were originally formed as a five-piece outfit in the middle of the 1980s when the founding members Howard Raucous (v), Giles "Beaker" Brett (g), Mark "Moff" Moffat (b), Andy Young (g) and Johnny "Wolf" Basford (d) decided to form a new band, when they met in a bar in Loughborough, UK. After some local gigging the quintet recorded a five-track demo tape, which also included a song called Brain Decay, that was eventually made public on the Manic mini CD about two decades later. With the band located further away from London's Psychobilly circuit and it's main record labels, Howard decided to distribute their first EP on his own. Raucous Records has already started for mail-order services and so a new record label was added. In 1988, they continued without the rhythm guitar of Giles Brett and Dave replaced Wolf Basford on drums and the new lineup appeared on a couple of compilation albums, Gipsy Girl and Psycho Tendencies, before The Go-Katz imploded.

The Go-Katz' output has always been a very traditional Psychobilly sound, based upon up-tempo Neorockabilly, mixed with Punk energy, healthy slap bass sounds and the avoidance of 50's-styled lyrics. Tho' the band's lineup suffered through some breaks and changes, front man Howard Raucous aka Howard Piperides has always tried to keep The Go-Katz afloat and was even performing with a Russian band called The Bombers in 2000. He finally renewed The Go-Katz with another comeback gig and a new line up Graham Bateman (g), Jez Jordan (b) and Steve Clark (d) ) starting in 2005, which is also featured on the mini CD Maniac, released in 2007. The current line-up consists of Howard, Steve Clark on drums, Dan Clark on double bass and Janson Diamond on guitar.