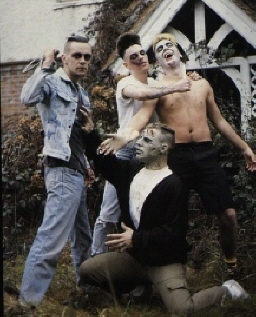 The Frantic Flintstones sprang from  the second wave of British Psychobilly bands,  formed by Gavin " Chuck " Harvey (v) and former Coffin Nails / Meteors drummer Toby Griffin back  in 1986.They added Clive Howling (b) and a guy called Rick (g). In early 1987 Toby and Rick left the band and were replaced by  Neil " Nodger " Smith (g) and Monkey Gunning (d). During that year, the Flintstones toured regularly throughout the UK, Gary Day (b) joined the band, Chuck Harvey suffered a heart attack, and the band finally released their now classic four track debut EP "Bedrock " on Raucous Records.  Two full-length platters followed the next year. " A Nightmare On Nervous "  was released in March 1988 and reached # 12 on the UK Independent Album Charts. Another lineup reshuffle brought in Jonny "Pug" Peet (g)  in 1988 and Chuck Harvey signed a record deal with Link Records, which offered him a position as scout for Psychobilly music and A&R man-they even created the subsidiary label under the moniker of " Chuck Flintstone presents...", that eventually lead to 35 Psychobilly releases- . After a stop in a prison cell and some more record releases, Chuck Harvey hired Alan Wilson- who would later join the Frantic Flintstones as their guitarist too- as studio engineer in 1992. Their first session produced another classic of the genre "Jamboree" and the twosome have never stopped songwriting and recording sessions ever since then .

With the success of more than two dozens regular releases and appearances on countless compilation albums, including Zorch Factor 3, Psycho Attack Over Europe 3-5, both volumes of the Katz Keep Rockin´ series or Psycho Mania, the Frantic Flintstones have become one of the best-loved and most prolific outfits of the European Psychobilly movement ever since then. Although the the band has always been plagued by lineup changes, main man Chuck Harvey has always found a way to keep them rolling. Their very unique blend of  sex & drugs & Rockabilly and the ability to cover tracks from other genres (Country, Ska, Folk, Rockabilly....) and make them completely their own, gave them a very strong fan base- widely known as the "Muh Posse"- and  is just another hallmark of Chuck Harvey. A solid live act too, the Frantic Flintstones have always had the reputation as crowd pullers and headlined  loads of Psychobilly all-dayers and festivals all over the world. Chuck has moved to Brazil in 2008 for personal reasons, but the Flintstones story will be continued anyway.