Firstly, what about the roots of Bang Bang Bazooka. Can you tell us a little bit about the foundation of the band. Who came up with the idea to form a new band? Did you have any special intentions or goals back then?

Marcel was playing at the time in a band called "the Cavemen". In this period he became a close friend to Francois, and wanted him to be part of the Cavemen. After several rehearsals were the cavemen not very enthusiast about the new sound.
Marcel was, and decided to quit en go further on with Francois. A new band was born.

Bang Bang Bazooka is a very special name. Where does the band name come from?

As we always says, from the dictionary, we were looking for something explosive, after the letter A, you soon come across the B for Bang further down Bazooka.

What were/are musical influences for the band?

Everything from Jazz to blue grass, honky tonk, rockabilly, rock'n roll, punk, surf, you name it.

Despite the fact that the Netherlands are a very small country, a lot of Psychobilly and Neorockabilly bands have emerged from here-- Batmobile, Archie, Tranquillizers, 69 Beavershot and you guys of course just to name a few. Do you have any explanation for that? What do you think makes the Dutch RnR scene so productive and special?

Francois: NO idea...., drugs ? Just joking. We're also not sure, it is that special ...There are a lot of pretty good Bands all over Europe.
Anyway thanks for the compliment.

Marcel: We don't know. In the late seventies/ early eighties there was a big rock and roll scene in Holland. Twice a year the Rockhouse Rock and Roll meeting was organised in Eindhoven ( our hometown). So perhaps that was on of the influences. At that time there were a lot of good bands playing in our neighbourhood like; Crazy Cavan, the Jets, the Polecats, Restless, the Blue Cats, Matchbox, etc.

The band was also part of some of the big Psychobilly festivals back then. Do you have any special memories about that and what was your most memorable gig?

Ha Ha, actually we never had the feeling Psychobilly's really enjoyed a BBB gig. Anyway we never feeld being a "real" or typical Psychobilly Band. We wrote a couple of tunes en lyrics which can be classified as Psycho, we still do, but we did the same with Rock'n Roll, Rockabilly and Blues...the main thing was that in any kind of these styles, which we all love, you can hear it was played by BBB.
I think for that part we've succeeded... About special memories, we have lot, we can write a book about it. Maybe we will !

Bang Bang Bazooka eventually split in 1994.What were the main reasons for the split. Why did you finally decide to reform the band ten years later?

We were all playing in different bands on a regular basis at the time. Marcel with the BellHops, Francois with the Backalley Butchers and especially Bart (Note: Bart Gavers / double bas player ) was busy with other bands and projects.
The success of Peter Pan Speed Rock was causing Bart to have less time to spend performing with BBB. It was hard to plan anything and nobody likes to rehearse by himself. So we decided to take a break and have a KitKat... a big one.

What was your first contact with Rockabilly or Psychobilly?

Marcel: The first band I saw were the Sex Pistols in the Effenaar in Eindhoven. At that time( 1977!) there was a bar in Eindhoven, called Sunny Explosion. That's where I saw my first rockabilly band called: Little Tina and Flight 56. The first Psychobilly band I saw were the Polecats. At least that's what some people called it back then. They had a wild act. Jumping ,screaming, etc. And they are still crazy. We played with them a while ago. At that time the Polecats were one of the bands I enjoyed the most.

Most of the time we are missing the -Billy. But there are a lot of really good bands coming up, have a look at My Space! The style still is HOT.

I realised that you were also involved in some other Rock´n `Roll related outfits. Please tell us a little bit about your other musical projects.

Francois played with Eric (Batmobile) in this period, in a band called the Backalley Butchers in the same period with Bart on the double bass in the band Blue Fingers, a swing/jazz band, after that with The Vindicators (Punk rock) and Light and Shade (Blue grass/Jazz)
Rene (Note: Rene van Iersel /drums ) was playing in a Rockabilly Band called the Deltones.
Marcel with the Bellhops, I guess you know the album on Rockhouse Records ? then played Marcel with the Taboozers, also a Rockabilly Band.
Bart, the busy one played guitar instead of double bass with the Blazing Saddles / the Gearbox Devils, back on the the bass with the Lovesteaks, and is now rocking all over the world with Peter Pan Speed Rock.
Karel (Note: Karel Panjer / double bass) played the double bass also with the Blazin' Saddles and the Gearbox Devils, after that with the Sideburners, a band a la Paladins then with Marcel and the Taboozers

Bang Bang Bazooka is gigging more and more frequently at the moment. Tell us a something about your future plans. Are there any plans for new releases too?

We are working on a new album. We've already recorded 6 songs and we're going back in the studio the 5th of January to finish the album.
So we think/hope it will be released in April or May. 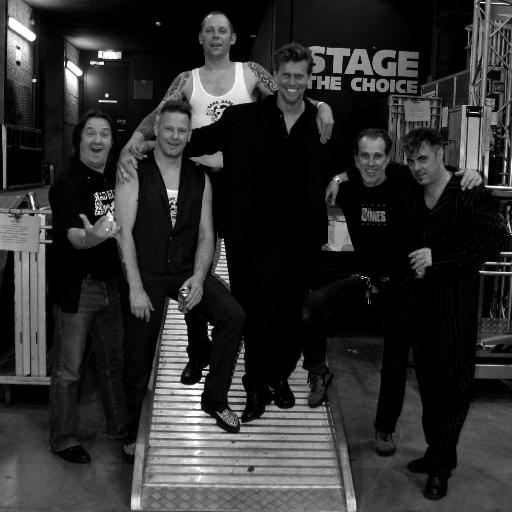