This is the first offering from the UK Neorockabilly quintet, originally out on 7´´ vinyl. It includes four tracks and was produced by Boz Boorer and Ray Frensham. The Northwood Reocords release gained some positive press, was well demanded and also hit various UK alternate single charts. Tracklist: Rockin´ Shoes-- Searching For My Baby-- Reconsider--Bad Day.

This is the second and final 7´´ vinyl release from the short-lived Fireball XL 5, also distributed by Northwood Records. Their furious mix of up-tempo Rockabilly with a dose of Country influences, which was described by the band as „ epileptic hillbilly“, backed by the sound of Jonny Bridgwood´s hard slapped bull fiddle , excellent guitar work and some frantic screams, links the band with the early Psycho sound. Tracklist: The Man With No Name--Prison Walls (Don´t Tell No News).

The nine track long-playing recordwas originally released on 12´´ vinyl by Northwood Records back in 1986, some time after the band´s official split. It includes all songs from their 7´´ inch offerings plus three more tracks. This is a great collection of tunes from one of the most underrated Neorockabilly/ Psychobilly outfits from the scene´s early years. On a side note, " The Complete Works“ plus five more previously unreleased tracks were re-released on CD format on a split album with The Riverside Trio. Highlights: Rockin´ Shoes, Reconsider, Prison Walls, The Man With No Name and I Won´t See The Sunrise Anymore. 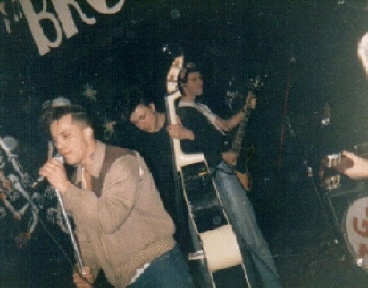