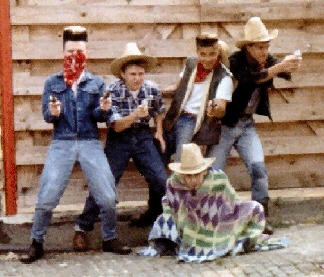 Fireball XL 5 originated from Norwich in early 1982. The band was formed by Mark Kelf (v) and his schoolmate Kevin Parfitt (d). They added Jonny Bridgwood (b) and Mark " Thorny" Thorne (g) and the band was named after the early 1960s Gerry Anderson animated TV series.  An early lineup reshuffle brought in Neil " Mustard " Samuel on rhythm guitar and Kevin was replaced by Ian Cooper on drums.  The quintet started to gig around and recorded a ten track demo, that was send-among others- to Northwood Records. The band eventually had two 7´´ vinyl  releases and a complete work album with the record company, everything produced by Rockabilly guru Boz Boorer.  In  December 1984  Thorne and Jon Bridgwood- who went on to join the Sting-rays- left the band mostly due to musical differences. Mark Kelf tried to renew the band with Gavin Peak (b) and a guy called Robin on guitar, but the original magic was gone. About a year later Fireball XL 5 called it a day.

Fireball XL 5 emerged in the very early 80´s with their unique mixture of raw Rockabilly and Hillbilly, blended with a decent dose of punk energy and an enthusiastic style of play, which they called themselves " epileptic hillbilly "back then. Their reputation as crowd pleasers made them a well received support act for premier bands such as The Meteors or Guana Batz. Mark Kelf has continued his musical career up to these days in Mark Kelf & The Valley Boys.