The three track EP Holy Hack Jack was released by I.D. Records in the middle of 1986 to support the distribution of  In Sickness And In Health. The 12´´ vinyl also had some decent success in the U.K. Independent Chart in the same summer . All three songs are identical with the versions from their debut album. Track list: Holy Hack Jack //Rubber Buccaneer--Don´t Go In The Woods.

This is a long deleted 7´´ four track EP , that was pressed on yellow wax by Fury Records back in 1993. The B side includes two songs from the "Kicked Out Of Hell" era. On a side note, Marijuana was DaG´s last output on Fury Records. Tracklist: Marijuana--One Sharp Knife //Cast Iron Arm--Satan's Reject.

Here you go! This is definitely one of the most influential and inventive Psychobilly recordings all-time . The I.D. Records classic excels with fourteen killer tracks , the perfect Rockabilly guitar play of Dick Thomas and the unique voice of Mark Phillips, that results into a stunning, unique blend of Rockabilly & Punk, packed with twisted lyrics. Add one of the most memorable sleeve designs and two handful of Psychobilly anthems and fan favourites and you know why In Sickness & In Health is a quintessential release of the genre. Special guest Simon Crowfoot (Torment), who was a stand-in bass player in the band´s earlier days,  picked the double bass on Rubber Love. Highlights: Pervy In The Park, Busted Hymen, Holy Hack Jack, Pickled & Preserved, Transvestite Blues, Rubber Buccaneer, Rubber Love and PVC Chair.

It´s all in the name. Kicked Out Of Hell is simply another cornerstone in the history of Psychobilly music.  Fantastic slapping bass tones, twangy guitar sounds, created by new acquired Lex Luther , and Sparky on top form all leave their mark on this great production. Most of the songs were written acoustically during moments between 1987/88 when the members of the band lived together in a squat in London without electricity. Highlights: Human Slug, Cripple In The Woods, Cast Iron Arm, Call Of The Wired and Shadow Crypt .

"Demented Are Go Present... The Demon Teds- The Day The Earth Spat Blood" is the full title of the band´s first output with Link Records. The eight song mini album was written and recorded within three days and was done with new recruited Mike (g) and Billy (b). It also includes a new take of  One Sharp Knife, a song that originally was recorded round about 5 years earlier for the "Hell´s Bent On Rockin´ " compilation album. Other highlights are Flight 103, Country Woman and Now She´s Dead.

DEMENTED ARE GO´s Orgasmic Nightmare is another solid, superior full-playing record from the Welsh Psychobilly headliner. The band´s first output with Link Records was distributed on 12´´ vinyl and on CD format, with the later eventually including five bonus tracks. With Lex Luther back on board, the quartet laid down a bunch of new, excellent songs, with many of them maintaining in the band´s live set up to these days and still filling the wreckers yards on this planet. Highlights are Beast In the Cellar, House Of Blood, Clitoris Bite Boogie, Who Put Grandma Under The Stairs.

"Tangenital Madness On A Pleasant Side Of Hell " is the complete title of this album, that was in drummer Ant Thomas´ own words " a low budget rush job with all tracks mixed in one night". Despite some well written songs and good moments, the fourteen tracks production on Fury Records contains too many fillers and marks the change of direction when the band moved further away from a more authentic Psychobilly sound.. Highlights: Zombie Stalk, Queen Of Disease and Brand New Corpse.

This is an early DEMENTED ARE GO! gig, recorded live at the Psychobilly temple and features the In Sickness & In Health line-up. The set  includes early fan favorites and brings back the high-energy, intense sound, raw power and pure excitement of  one of the most splendid live bands from the second half of the 1980´s. Eight of the tracks were released before as Sick Sick Sick split album, that also includes live recordings from Skitzo and the Coffin Nails. Highlights: Be Bop A Lula, PVC Chair , Rubber Buccaneer , Pervy In The Park and Holy Hack Jack. 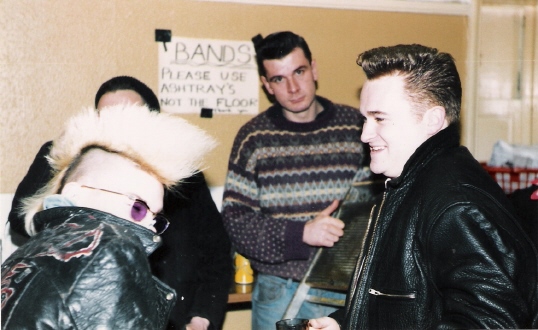