Hello Bracko, first of all tell us the story of The Rednecks.

The Rednecks were a Scottish Psychobilly band who were formed in the very late 1980's. We supported the likes of Demented Are Go, The Coffin Nails, The Termites and The Long Tall Texans and played at venues such as The Big Rumble, Billy's and The Sir George Robey. Not long after our first single for Fury Records the band imploded but re-emerged a short time after as The Salem Dragsters.

The only lasting output of the band is  the track Wild Man on Fury Records´  Psychobilly Sampler and the 7´´ EP For A Few Rednecks More. What do you think about the platter after all these years? Do you still listen to it?

I occasionally still get a giggle from listening to this low-rent piece of smut but I've probably sold more copies of the single, mostly to America, since the book came out than we ever did when it was released. My favourite track was 'Jailbait' but I also really liked 'Razorback Attack' which has recently resurfaced on a Fury Record's latest compilation CD 'Psychobilly Sampler 3'.

You started writing about Psychobilly back in 1999 with your fanzine The Encyclopedia Of Psychobilly & Trash: Vol.1 . So why and when did you make the decision to begin as a writer?

The Encyclopedia Of Psychobilly & Trash was basically a first effort of what became my current fanzine 'Vinyl Dementia'. I worked in a big record store in Glasgow which was open late every night and I used to work on the mag and print itin the shop during the night shift. Before that I had a short series of cult movie fanzines called 'The Encyclopedia Of Cinematic Trash' which led to a short appearance on TV and a chance to write for a few Film & Music magazines.

The book Let´s Wreck- Psychobilly Flashbacks From The Eighties & Beyond was finally released in 2003. What was the idea or inspiration to write the minutes of your life as a Psychobilly?

I could not believe that no one had ever written a book about Psychobilly  so I thought f**k it, I will have a go. At the time though, with a new baby in the house, I just did not have the time to properly research Psychobilly history  as much as I thought it deserved so I decided to write from my own perspective of the scene... even though my memory was a bit warped.

Let´s Wreck sold pretty well (hey folks, we're still talking about Psychobilly and not about an Elvis Presley biography) , but a second edition of the book is still available via Stormscreen Production or the usual record shops. What do you think make this book so popular for Psychobillies, old and new?

Because it was the only one available at the time!!! Who knows? I have had a lot of feedback from people who tell me that the book reminds them a lot of how they got into the scene. Hearing The Meteors / King Kurt for the first time, meeting other Psychobillies, seeing their first Psycho gig etc. I think the experience was the same for a lot of folks  whether they were from Dundee, Doncaster or Dusseldorf... especially in the early days when the scene was so new. Also the book is quite short so it suits people with a short span of attention.

I do know lots of stories about how people get into the Psychobilly thing, but I never heard about someone turning into a Psychobilly  while watching Top Of The Pops. Can you recount the story for those who haven´t already read your book.

I was always into Rock 'n' Roll and Punk but  being young and ignorant I never knew that the two had ever been combined beyond The Clash doing 'Brand New Cadillac' and Sid Vicious singing 'Something Else'. When I saw King Kurt on the UK music show 'Top Of The Pops' I was amazed by their music, and haircuts, and no band like that had been on British TV before. This was long before MTV etc and seeing underground bands on television was very rare. I talked about the band's appearance with a friend and she gave me The Meteors 'Wreckin' Crew' and 'In Heaven' and that got me started.. immediately!!

Let´s talk about the music. A lot of things happened for the last two years. A bunch of bands and artists did start a comeback or about planning a reunion. Nigel Lewis, Mark Cole, The Termites, Go-Katz, King Kurt, Sunny Domestozs and many many more found their way back into the crazy world of Psychobilly. There´s also an increasing interest in the origins of the music and all the early recordings. Do you have any explanation for that?

I think with Psychobilly you simply never lose it and many of these bands are simply carrying on where they left off. The scene has also grown so much in recent years the demand for 'old school' bands is understandably stronger, I don't thing it is all a big nostalgia vibe either, King Kurt have totally revitalised their set with Strangy on double-bass and I think The Termites' new album for Crazy Love will appeal to punters right across the Psychobilly scene. As far as interest into the roots of the scene go I think its great that new fans are interested in where Psychobilly began and think its important that folks don't think Psychobilly just appeared in the last few years.

What do you think are the most underrated bands and albums of the genre?

Without a doubt all of The Vibes releases and both The Purple Things mini-albums, after that they lost me but those early recordings are excellent. Also both The Surf Rats albums for Lost Moment Records, 'Trouble' & 'Straight Between The Eyes', are unbelievably good yet the band disappeared off the face of the earth. I also recently got back into the Hillbilly Headhunters' first 12" for KIX 4 U, every track is a solid stomper and for the time it has a really well produced sound. Glasgow's The Styng Rites were a great band and their debut single 'Baby's Got  A Brand New Brain' never received the status it deserved but thankfully their recordings for the Stomping At The Klub Foot albums got a bigger audience. The Termites' 'Overload' was a great album but initially had a very short pressing of 999 copies which held it back a bit. Finally, why Elvis Hitler's 'Hellbilly' album has been forgotten by most people is a mystery to me, alongside The Quakes' albums this is a cornerstone of American Psychobilly.

Let´s talk about the future of the genre. The main events are still headlined by the same old big names. Do you see any new talent out there?

There is plenty in Europe, America and Canada but the UK scene seems pretty sparse. Their are some positive signs though as The Rock-It Dogs put on an excellent live show whether they are playing a half-empty boozer in the middle of the week or dominating the main stage at The Speedfreaks Ball.  They are really tight musicians and could really bust into the global Psychobilly scene if they get the chance. I'm also a big fan of Liverpool trio Blue Demon, they take the real roots of old school Psychobilly and create their own thing. Without a doubt they have the potential to be as important a UK band in the 2000's as Torment were in the 1980's/1990's.

You´re also the author of The Encyclopedia Of Cinematic Trash. What are you favourite movies?

Your new book will probably be released in spring 2007. Do you have any details for us?

The new book is for Cherry Red Records (who produce the Psychobilly Collectors series of CDs) and is more of a reference book looking at Psychobilly history across the world: the roots of the music, the bands, the records, record labels, promoters, websites, style/fashion, haircuts, tattoos... blah, blah, blah. All from the late 1970's until today. That is why it has taken so long to complete... new things are happening on the scene all the time. At the moment the writing is done and I am editing the whole thing before compiling the photos and illustrations. If anyone has any unique photos or memorabilia from the scene I would be interested to hear from them. I can't offer any hard cash but anything used in the book will receive full credit. Folks can get in touch through my website www.stormscreenproductions.co.uk www.stormscreenproductions.co.uk . 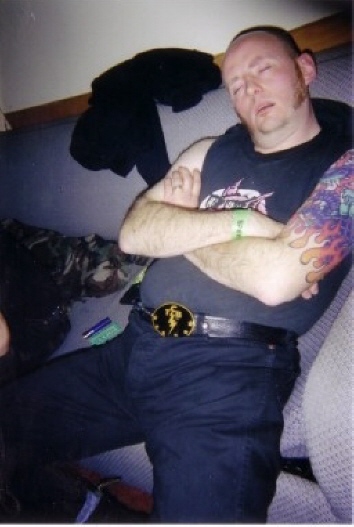