( GUITARIST WITH THE RADIACS AND DRUMMER WITH THE BLUE DEVILS  )

How and when did The Radiacs form?

The Radiacs formed in 1983 after a couple of other bands split. First line-up:

I lied that I was really good on guitar to get in the band, but with practice it came. The name Radiacs is from a cutting machine used in the steel industry in Sheffield where we are from!

The Radiacs released three albums, Hellraiser (1989 on Link Records), Live And Rockin´ (1990 on Link Records) and Going Strong (1993 on Tombstone ). Were you happy with the sound on them?

Today I think the first two albums were garbage, but at the time of release I thought they were great. "Going Strong " was a good album. We recorded it in Holland after a huge German tour. By the 3rd album Paul had left to join The Krewmen so we had Charlie ( Fallensteller ) of the Scum Rats helping us out on bass for that tour and album. Charlie is a great guy and I am very happy that he went on to bigger things.

What was your favourite place to play and did you ever play at the Klub Foot?

We played loads of good clubs all over the U.K. too many to mention. We got asked to play the Klub Foot but we were on a French tour so could´t. Not long after it closed. We played loads of times in Europe and loved every minute of it. Just talking about it brings back memories and Germany and the people were brilliant to us.

Any funny "on the road" stories?

Ha ha. Loads of funny stories but what happened on tour, stays on tour. We all made a pact. Some funny things happened involving vomit and snot!

Why and when did the Radiacs split?

The band just came to an end really in 1994/95. No major fallouts really. These days Paul has his own band- Egor´s Back Bedroom- Shaun drums in a punk band. Dale´s just working, not in a band and I have a new band, The Chills. We have kept pretty much in touch with each other.

How did the Blue Devils form?

Whilst Paul had joined The Krewmen, I started jamming with them on drums at Tony McMillan's house at weekends. Anyway back in Sheffield I got an offer to join a band where I knew everyone since we were young. This was the Blue Devils. The first line-up was:

We had some wild times and parties, some which have gone down in history and to be honest don´t know how we are alive today. We released two singles and 3 albums and were on lots of compilation CDs. We even had Venus Raygun ( she of Empress Of Fur fame ) as a dancer on stage at our early gigs and on a record cover! Towards the end of the band Boz Boorer who produced some of our stuff played live with us.

Tell us about your new band, The Chills.

The Chills came about due to boredom and is Chris Nagle on bass, Kev Lee on drums and me on guitar.

Any regrets and what about the future ?

No, not really. Well apart from playing better on guitar in the early days of the Radiacs I got divorced and lost some good jobs because of Psychobilly. But I had such a great time I would do it all again exactly the same. As for the future, The Chills should release something in 2009. There´s a couple of irons in fire and we may do the some recordings at Alan Wilson´s Western Star studio. 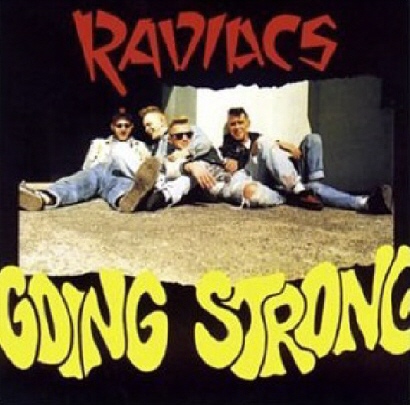 THE CHILLS ON MYSPACE