Very little is known about Sgt. Bilko´s Krazy Combo. So please tell us the Bilko´s story. When and how did you guys start?

I suppose the band started in 1982. It was me and my brother Tim....and who ever else felt like joining in. Mark (Bending ) was introduced to me by Pete Turland is who a big name in Canada now. Pete left after about six months... but Mark stayed through almost every line up change.

What about the band name? Is there a special story about it?

The band frequently opened some shows at the legendary Klub Foot, supporting many of the scene´s most popular bands like The Meteors, Guana Batz, Rochee & The Sarnos, Long Tall Texans, Torment etc. etc.. Are there any bands that did make a deep impression on you?

Restless ....gosh! what a guitarist...we'd watch in Awe....for hours. Skitzo were a good bunch of guys....we'd have many a drunken conversation at weekenders...Klubfoot etc...a good laugh! And Frenzy were taking you to places....I love stuff that goes off on a tangent and makes you think.

Bilko´s Krazy Combo is also remembered for doing always a crazy show. What are the craziest things that happened on stage?

I wish I could remember....I was /am a manic depressive...so I was always doing things I thought were quite normal....but of course the other guys knew were insane. I know towards the end of the Klubfoot ...we went through a phase of throwing  buckets of wet fish and dried pasta into the crowd. You'd see immaculate quiffs ...full of wet smelly fish...and during the quiet moments of a song you could hear the stomp of boot on dried pasta....heaven!
One time we played a big old theater with a large high stage...Mark was on slap Bass...he got a little over excited and fell through the stage...we looked round and he was gone....we laughed so much I don't know how we finished the gig!

The Bilkos finally appeared on Stomping At The Klub Foot vol.5 album back in 1988. How did it happen?

It nearly didn't....the guys had to talk me round! If you played London often enough a deal would happen....but I didn't think it was a good deal.

Why didn't you think it was a good deal?

I would have to read the contract again to answer that fully. But it was also a gut feeling.....the way ABC records gave us very little time to sign the contract.......it was a take it or leave it offer....very rushed. I'm so glad they only got the one song. They could have used any song....we had no control. But they still have the whole gig recorded.....in their
vaults.....or their bin!


The band photo on the inner sleeve of the vinyl release shows the band wearing rubber gloves on their head. What´s it all about the rubber gloves?

At work I used to have to wear protective clothing. Overalls, wellington boots...rubber gloves. But I would fool around ...put them on my feet .....on my head....on other peoples heads....etc.....I know it's sad! A few people would wear them at our gigs.....and they became known as 'the marigold mob'.

After buying a copy of Stomping At The Klub Foot vol.5, that includes the awesome Point Of No Return, I always kept an eye out for the Sgt Bilko´s Krazy Combo debut platter some twenty years ago. Listening to all these exciting tracks like Nosey Neighbours or Married To The Bottle now on the band´s MySpace, still leave me wondering why Bilko's were unable to sign a record deal. Why did the album never happened ?

Things would have happened if we'd lived closer to each other ....or better still all lived in London. As it was Martin was the only one who could drive....and he lived 50 miles from me.....and I lived 20 miles from Al (Gare). We split up mid way through recording an album. It will be released eventually! Mark and I had released a single 1983, married to the bottle/public enemy no.1 (lives at no.10). Just a short run locally. It featured our first drummer, Roy Mason....who we have started recording with again. And now Martin has got back in touch ....so our options are open.

Is it true that you "broke both ankles....whilst tying your shoe laces "?

Yes ....and no!
The truth is much stranger than this! And if you can get me drunk enough.....I just might tell you! I nearly broke my arm too....just before a gig with the Long Tall Texans in Stevenage. There was a skateboard park nearby....and I thought 'ummm....that looks easy!' I 'borrowed' a small lads board.... went off down the curve...up the curve backwards....flipped over backwards...and landed on my elbow.....ouch!
I played that gig in agony! my own fault for trying to show off! I'll just stick to car surfing in future!

I´ve also realised that you have written all words and music. Where did your inspirations come from to write a song?

My father was  a cruel and brutal man. I had a terrible childhood and suffered depression as a result.
I would often sit alone in my room and write poetry. I would observe life and spend a lot of time reflecting.
A lot of my poetry will make it's way into my songs. I have a great heap of stuff that I wrote from years ago....to plough through.

When and why did the band finally split up?

There are many reasons the band split. Mark left in 85 because he was young and still at school. We had recorded 'married to the bottle'/'left handed gunslinger'/'point of no return' and 'public enemy no.1(lives at no 10)' at the end of 1982,with Roy Mason. It was a demo of these songs that got us the Klubfoot gigs.
I sent the Klubfoot the tape in late 86, but did not expect a reply! They offered me a gig supporting Restless.
I had no band....so had to turn the gig down. I hurriedly put a band together. I'd played with Martin, before, in the Blue Ridge Rockets. This band also featured Helen Ingham (Queen B's, Space Cadets, Johnson Family etc). So I called Martin. Al Gare was only 15yrs old or so....and used to follow us about. He could hardly play the Bass. So I had to spend six months or more teaching him. We all lived too far apart to practice enough. Mark rejoined, once we were playing the Klubfoot....this upset Martin and Al....as they thought he was a newcomer.
And I suffered with depression....So the fact that the band was put together in a panic (and other reasons) lead to the split. We split up on stage...at 'the night of the longknives' Martin walked out....and Skitzo's drummer walked on...
the gig got Krazier!!

Were there any other bands / project in which you did partake ?

Yes!    but I will tell you more when there is a release date confirmed....I don't want to jinx things.

" There is a rumour that Bilko's may reform.. the original klubfoot line up. " is written on the band´s MySpace. So please tell us a little bit more about the band´s future.

I keep bumping into Al and Martin at weekenders.
They always seem eager to get together again.....but nothing happens. This has gone on ,like this, for about 10yrs.
It was a fluke that me and Mark got together. We hadn't seen each other since 1989.We found each other again in march....I'd just returned from a recording session in East Berlin. If I'd met him earlier, I could have used him on that session. A friend of ours convinced us to get a myspace profile. And now Martin has been in touch.....so there is a good chance that the Klubfoot line-up will reform one day. 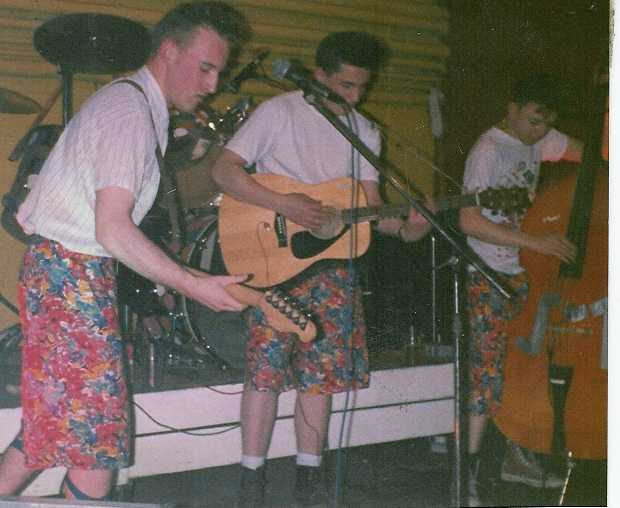