The new year is already up and running, but my first question is what did you guys do on new year s eve ?

We played a gig on the New Year’s night, then we moved to our friends, where we  were drinking alcohol, roasting a goose and watching the old Soviet comedy movies. It a was great time!

Let s talk about the music. How and when did you get into Rockabilly / Psychobilly ?

Teo: We are almost 10 years in this theme. The main influence was taken from the bands that were playing at that moment in Russia, when we were starting, and of course foreign old classical rockabilly and psycho bands.  As time was passing, we started to develop the sound and arrangements and went into some experiments and so we were evolving from rockabilly music (that we played in the beginning) to our own style.

Andy: We started with the covers of our favorite artists at that moment – Stray Cats, Blue Cats, Batmobile, James Intveld and etc. Then we decided to write our own songs, that’s how we came to our first record in 2005. Then, we were searching for something new, as well as tried to follow the new influences of psychobilly scene in Europe.  We turned the sound of neo-rockabilly into more like punky sounding band. It wasn’t a decision, that came one day – it was really organic and long process, in which each of us put a lot of efforts and ideas. It is interesting for us to develop punkabilly in Russia, as I guess we are the first band here with such approach and sound.

Mike: I was studying the double-bass in music school, and heard rockabilly when I was 14. After graduating, I played blues, rock’n roll, country on bass-guitar in several bands, then I got  acquainted with the guys, took the double-bass again and got back to rockabilly music and learned how to slap.

Tell us a little bit more about the Beat Devils. How and when did the band form? Who came up with the band name ?

Andy: We started in 2001, as a company of friends, and played the first gig on the 17th of March,2001 Teo and me are playing from the very beginning, other members of the band has changed several times, and then Mike joined us in July 2003. The name of the band was the idea of our friend, who played rhythm guitar at that time – and it sounded like a joke firstly, but then we liked it and decided to leave!

Teo: But finally we formed as a trio in January 2004 with this name and this roster.

What are your main musical influences?

Andy: Of course, we took a great influence from psychobilly old-school scene of 80s – what to say about our understanding of this music, and then we listened a lot to modern psycho and punk bands, before forming our own concept. Personally I admire best of all Chris Cheney from Living End and Jeroen Hammers from Batmobile – they are really great guitarists, who influenced on my style a lot.

Teo: As a drummer I was really influenced by the music of Tiger Army, Living End, Mad Heads and Big Bad Voodoo Daddy.

You guys are from Moscow, Russia. Tell us a little bit more what s going on over there and do you have a close friendship with any bands from Eastern Europe ?

Andy:  The first psychobilly bands were from Saint-Petersburg in late 80-s, early 90-s, Moscow considered to be always a “rockabilly” city. But  during last 10 years the situation changed a lot both for the bands and the audience. It is great that now we have here concerts of great western bands, such as Mad Sin, Batmobile, Demented Are Go, Quakes, Milwaukee Wildmen and etc,  that is positive thing for our scene, we got more and more people to join the style! And of course it is a great tendency for local bands!

Now the major  rallies are in Moscow, St-Petersburg and Kiev. And everybody there are friends and know each other well. We also got many friends – both bands and supporters – in such cities as  Rostov, Ekaterinburg, Kharkov, Ivanovo and etc.

The Beat Devils have already released two albums and a three track EP . Was it difficult to get the first record deal done?

It wasn’t really difficult, the guys from Mystery of Sound (Russian major label) came to our concert and said they were interested to make a release of a rockabilly band, and we already had a recorded material at that moment, so everything was decided in a couple of weeks. Then we were lucky to get a proposal from TCY-records, to make a European release.

Second Date hit the record shops only a few months ago. The sound moved a bit forward from the straight, up-tempo Rockabilly sound of Get The Beat And Meet The Devils to a more up-to-date, more varied interpretation of the theme. How did it happen?

Yes, you’re right - this album shows how the sound of the band turned from neo-rockabilly into more punky sounding billy band. Although it wasn't a decision it just happened to be that way. The album consists of  12 self-composed tracks, some of them were recorded with the help of
additional musicians (keyboards, saxophone, trumpet,> lapsteel guitar, harmonica), nevertheless the main core of Beat Devils' album is the sound
of slapping bass, guitar and drums - a "classic" rockabilly trio, but  with energy and emotions of punk-rock music – that what punkabilly means for us, as it’s not just a punk-rock with double-bass. The title of the album was chosen, following the idea of "second date syndrome" - as it is always
more serious and responsible for both parties, but at the same time gives you more chances and opportunities to get acquainted with each other better (and in our case these parties are: band and its audience). And we would like to say a BIG THANK YOU to the guys from Crazy Love Records, and personally Guido Neumann, who really helped us a lot to present our music for the western audience!

What are your plans for 2009? Any new releases in the pipe ?

Teo: We plan to start the recording of the third album. It depends on the number of factors – the touring schedule and etc, so it’s hard to say when we will start the studio sessions. As for the other plans – we always aim to extend the geography of our tours, to progress and to express ourselves in our style of music – and not to forget to hang out  and to revel, of course!

Mike: We plan to continue touring – to present our new album in different cities of Russia. There are some new interesting musical projects, that we plan to make this year.

Andy: We plan to rock even harder!

When are you next playing and do you plan on doing a European tour?

We will go to Ekaterinburg on 7-8 March, to present “Second Date” there, then there are some offers from Rostov, Ivanovo and etc. On 14 March we will support MadDog Cole in their first visit to Moscow. We also have some offers from Europe, and I hope that this year can  give great opportunities for us.

Who, in your opinion, are the best bands on the scene?

Teo: Rather complicated question, because there are certain historical bands as Batmobile and Nekromantix, that are and will be also the best bands – and on the other hand there are bands, who are presenting the modern psychobilly-scene and whom  we like – for example Tiger Army, Peacocks, Creepshow, Long Tall Texans

Mike: The Peacocks, Tiger Army. We sympathize Nekromantix with the loss of Andrew Martinez – a real tragedy! 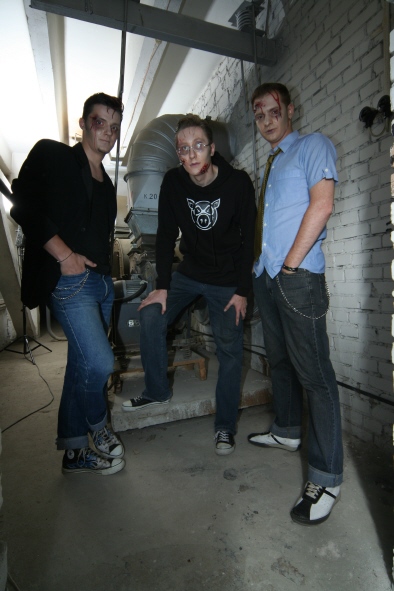