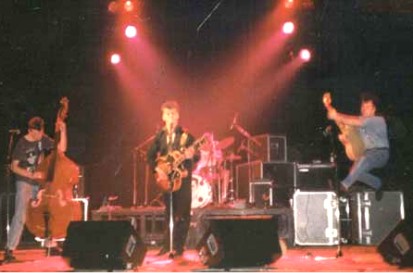 The Dutch Bang Bang Bazooka was formed in January 1987. The boys from Eindhoven started as a quartet, with original line-up of  Marcel Hoitsema (v/g), Jean-Francois Besson (g/v), Bart Gevers (b) and Rene Van Iersel (d). In the spring of 1988 they released their first full-length record on Count Orlok Records. After a solid success with their debut album, the band had appearances  on many venues all over Europe. In 1990 Bang Bang Bazooka dedicated their follow-up album "True Rebel" to their loyal roadie Arno V.D.Wassenberg, who died after an accident in June 1989 . Mostly due to other musical involvements by several band members the boys called it a day in 1994. Ten years after their first split, Bang Bang Bazooka finally has reunited  with the original line-up plus Karel Panjer (b), filling in for Bart Gevers, who's also busy as the regular bass player for Peter Pan Speedrock .