( GUITARIST OF THE SHARKS; SONGWRITER, MUSICIAN AND PRODUCER OF SEVERAL PSYCHOBILLY / NEOROCKABILLY RECORDS AND OWNER OF THE  WESTERN STAR RECORDING COMPANY)

You´ ve been playing Rockabilly music since the late 1970´s. what was your first encounter with rockabilly ? Why and when did you decide to play this kind of stuff?
I got into Rock n Roll music when I was about 10 or 11. My parents had old records in the house and I remember doing a school project at the age of 11 about Buddy Holly. This would have been 1973. I was a record collector and my hobby was collecting records from the 50's/early 60's and so my whole life revolved around this type of music. School holidays would be spent searching junk shops and auctions for old records. In the mid 70's all the rare US rockabilly started to become available and I became a fanatical collector of Rockabilly records. Then it seemed like I wasn't the only one any more. lots of people started to get into it and that whole revival scene started in the UK. It was great. At the same time I was learning to play guitar, playing along to these old records was just natural to me.
The original Sharks split after a trip to Holland in 1983-within a few months after the successful release of their debut album "Phantom Rockers". What were the main reasons for the split? Have you ever regret that the band split that early? I guess that The Sharks could have easily been among Psychobilly´s  top acts of the 80´s.
I don't regret it. The main reason we split was because Steve (Whitehouse) and I were both clashing. We didn't get along, so it was best we split. I wanted to concentrate on sound recording, which is what I now do for a living. So the years following the Sharks split were very important for me. They were the years I changed the direction of my life. I was never very interested in live performance, but always very interested in studios.

You´ve reformed The Sharks back in 1993 with a new lineup. What's the story of the resurrection?
I was producing an album and Gary Day was the bassplayer. He said he used to like The Sharks and he suggested the band reform. When I explained that I hadn't spoken to Steve in 10 years and about the reasons for the split, he suggested that he would be the bass player. So we did it.
The latest releases of The Sharks were a "Best Of Sharks" and the MCD "Short Shark Shock", that includes early and unreleased demos. Do you have any new plans with The Sharks for the near future?
We have recorded half a dozen songs over the past few years, mostly these have appeared on compilations on my label www.western-star.co.uk The problem is that I am always so busy producing others that I rarely have time for the Sharks. But, once I have enough tracks I will collect them all together and release a Sharks album on Western Star. I have no idea when that will be. It's not really top of my list if you understand what I mean.
You ´re also involved--as a musician-- in various side projects like The Woodies, Popeye´s Dik and the Reservoir Teds-to name a few. Tell me more about Chuck & The Hulas and  Popeye´s Dik!
Popeye's Dik... well John McVicker wanted to do an album, but he had no band at the time so he paid me and a few friends to write and record with him at my studio. That was fun.
Chuck & the Hulas is me and Chuck (Harvey)- one of my best friends, just having fun and going crazy with silly songs.
Speaking of Chuck Harvey. Do you remember when you met him for the first time? When did your professional connection with the Frantic Flintstones start?
I first worked with Chuck in 1990. His previous engineer "Swordfish (Marc Hunt) went missing. So Roy Williams recommended me. I had my own studio and Chuck came to me and we co-wrote and demo'd songs together. We got on well and soon became great friends. I am still very involved with Chuck - we do a lot of business together. I own much of his publishing and his music. I have also co-written with him a lot, and still do. I was in his live band for a while, but I grew tited of that crazy lifestyle and was also too busy with my studio to stay with him. I have produced a lot of his stuff and we plan a new album together in 2007. I like working with Chuck a lot.
You worked as a producer and engineer for bands like Frenzy, The Gazmen, Shock Therapy--i reallly love their "Tearin’ Up The Road"-- and Frantic Flintstones.  What´s the main difference between these two things (engineering and producing )?
Producing can mean anything from overseeing all artistic decisions to organizing session men, to paying for the project - it's a very broad term. Engineering means getting the sound from the band, onto tape and then onto CD and all that is involved along the way. It's the technical aspect. I usually like to perform both roles.
You own record label the "Western Star Recording Company" is also running since a few years. Which are the  planned releases for 2006?
We just put out a Joe Meek Tribute Vol 2 CD and next up are another album from Jack Rabbit Slim and another Bill Fadden CD.
What do you like most? Songwriting, recording a new song, producing or releasing a new album?
They are all good things to do. Each day of my life is a mixture of all these things.
You ve also issued the legendary Psychobilly magazine "Deathrow"  from 1993-2000, that is now available as a 400 page book . What was the idea of "Deathrow"?
At the time the media was ignoring psychobilly and it was left to home made, rather amature fanzines to keep fans informed. Deathrow was my baby and it grew into a thriving business. I had access to the bands, and was recording many of them too. So Deathrow was in a good position to get info and angles that others didn't get. I can't claim all the credit, I had help from a few friends, but I was the driving force and the one who paid for the printing. To see it come out as a book was very exciting.

I'm not sure about the best... but my favourites:

Thank you, Alan. Thank you for answering all my questions. 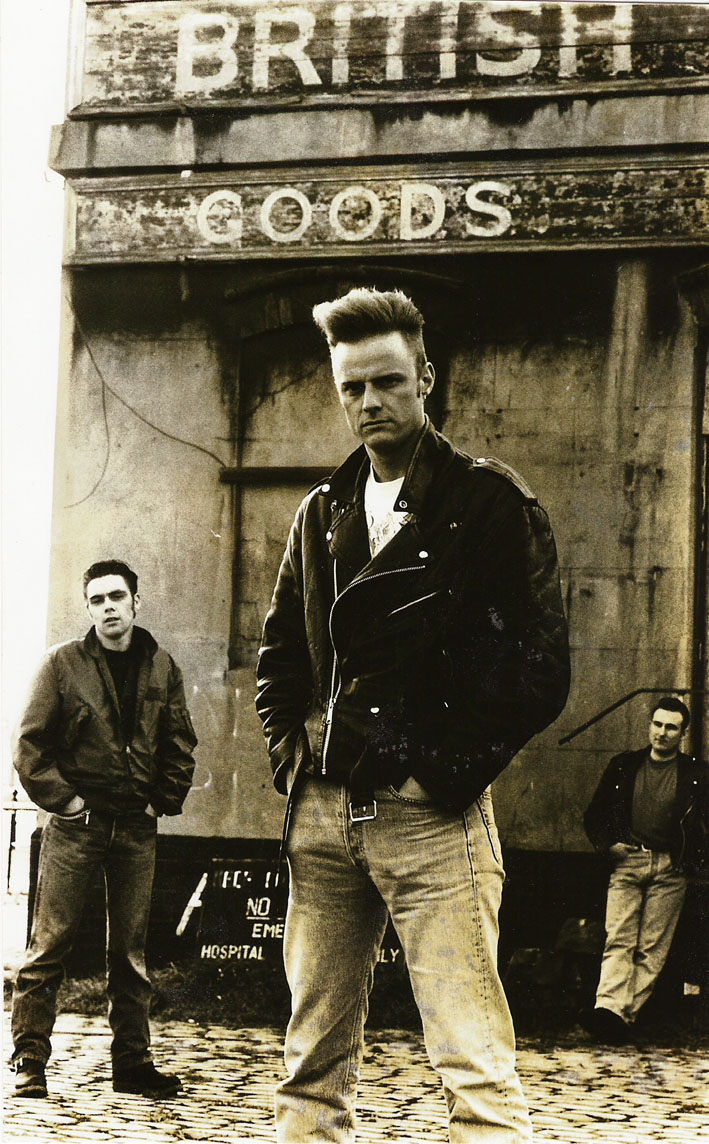