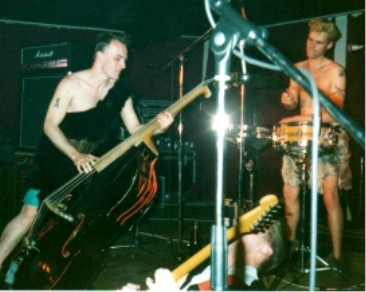 If you think of Dutch Psychobilly, Batmobile is the definitely the first band that comes to mind. In fact Batmobile is without doubt the most important Psychobilly act from the Continent. The outfit was formed by Jeroen Haamers (v/g) and Johnny Zuidhof (d) back in 1983, influenced by the likes of J. Burnette, Elvis Presley and The Blue Cats.  Because they could not find another slap-bass player, they finally asked Eric Haamers, Jeroen´s brother to join them. The lads were signed by Rockhouse Records and the trio recorded their first album at the end of 1984, the now classic 7 track- mini album "Batmobile", which was done in one day and included early fan favourites "Frenzy" and "Transsylvanian Express". In 1986, they did a radio session and released a new album ,entitled " Bambooland " and also had their first show at the legendary Psychobilly mecca, widely known as the Klub Foot.

The Batmos started to tour all over the world (including trips to Japan) and headlined several of the big European Psychobilly festivals. They had appearances on several radio & TV shows in the Netherlands, too. The band´s studio output was also very prolific and amazing over the years. The releases comprises their only album for Nervous Records Bail Was Set At 6,000,000(1988), Amazons From Outer Space and their 10th anniversary album Blast From The Past (1993). Sometime after their final studio album Welcome To Planet Cheese the band split up with the band members focusing on other musical projects. After a two year break, the original line-up did a comeback show at the Satanic Stomp in 2003 and has continued to play frequently at selected events a couple of times each year.